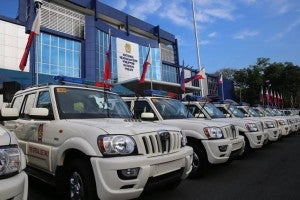 The Philippine National Police started distributing on May 30, 2016, 398 Mahindra sports utility vehicles to its police stations nationwide. The PNP bought the Mahindra SUVs from a private supplier for P394.4 million. (Photo release from the PNP)

MANILA — Weeks before a new administration takes over, the Philippine National Police (PNP) is distributing new wheels for the use of its offices nationwide.

In a statement on Monday, the PNP announced the acquisition of 398 Mahindra Scorpio Light Transport Vehicles, based on a P394.4 million contract formalized by the PNP and private supplier Columbian Autocars Corporation last December 10.

The 9-seater four-wheel drive sports utility vehicles, costing P878,000 each, will be utilized as general dispatch or service vehicles for administrative functions, surveillance, training and other command activities, according to the PNP spokesperson, Chief Supt. Wilben Mayor.

On Monday, 40 units of the vehicle were delivered to the PNP headquarters in Camp Crame, Quezon City, for blessing and distribution. The 40 will go to the Camp Crame-based directorial staff offices and national support units.

The remaining 358 units would be distributed to police regional offices, and regional branches of national support units, Mayor said.

Only last April, President Aquino himself led the turnover of 144 new Mahindra Enforcer patrol jeeps — from the same manufacturers as the Scorpio — to local branches of the PNP.

“Once these 144 jeeps are delivered, for the first time, all police stations in municipalities and cities [nationwide] will have at least one [jeep],” the President said in a speech, during the turnover ceremonies at the Quezon City Memorial Circle.

PNP Director General Ricardo Marquez, at the same event, said that in 2015, the PNP distributed 1,490 patrol jeeps to municipal police stations— 669 in Luzon, 369 in Visayas, and 422 in Mindanao.