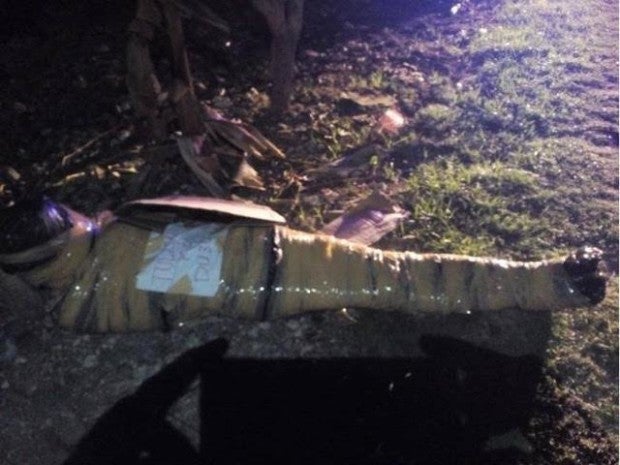 A still unidentified man wrapped like a mummy and a note that accused him of being a thief has been found in San Fernando town, southern Cebu. Photo courtesy of San Fernando police station

CEBU CITY—An unidentified man wrapped in a black trash bag and tied with a packing tape like a mummy was found along the national highway in Barangay Balud, San Fernando town, 29 km south of here, past 4 a.m. on Monday.

When brought to the provincial hospital in Carcar City, the man was declared dead on arrival by attending physician, Dr. Henry Famas, said PO1 Ronnie Margate of the San Fernando police station.

“We are still conducting an investigation on this incident. There’s a possibility that the body was just thrown here,” said Margate in a phone interview.

Chief Insp. Richard Gadingan, San Fernando police chief, said a resident alerted the police station about a body he found along the national highway in Barangay Balud about 4 a.m.

When policmen went to the area to check, they found the body placed inside a black garbage bag and then wrapped around with brown packaging tape like a mummy.

Gadingan said victim was brought to the Tupas Funeral Homes after Famas declared him dead.

When they removed the packing tape and garbage bag, Gadingan said the victim was male but was wearing a bra, an olive green blouse, and black pants.

The victim was between 40 and 50 years old and had a shoulder-length hair.

The victim was hogtied while a rope was tied around his neck. A piece of cloth was also placed in his mouth.

Gadingan said investigation was  being conducted to determine the motive  and the persons behind the killing. JE/rga