The boss has spoken: No Cabinet post yet for Leni | Inquirer News
Close
menu
search

The boss has spoken: No Cabinet post yet for Leni

DAVAO CITY—There might be “an opportunity” for incoming Vice President Leni Robredo, but incoming President Rodrigo “Rody” Duterte is not quite in a hurry to offer her a job in his Cabinet.

While his camp had repeatedly spoken about his openness to giving Robredo a Cabinet position, Duterte, in a news conference here late on Saturday, appeared noncommittal, saying he was looking to pay back first his debt of gratitude to the people within his own circle who were instrumental in his electoral victory.

“That (giving Robredo a Cabinet job) never entered my mind actually. I am not trying to be smart aleck, but I’m still trying to figure out the selection in my own group and party,” he said, contradicting earlier statements by his own people.

If it’s just talking about “an opportunity” for Robredo, “it would come later,” he added.

“It doesn’t mean to say the door is open and there’s already the job waiting. It’s an opportunity or maybe we can talk about just having a good rapport in the meantime because we don’t even know each other yet,” Duterte said.

Pressed on what role Robredo would have in his administration, Duterte again joked: “It could not be a starring role.”

Speaking to reporters in Naga City in Camarines Sur province on Saturday, Robredo said that if she would not be given a Cabinet job, she would focus her attention on antipoverty programs that could be covered by the budget of her office.

“I prefer an antipoverty job similar to the present setup of the antipoverty cluster [in the Aquino Cabinet] headed by the secretary of [social welfare and development],” she said. “[This job entails] clustered thrusts on housing, livelihood and agriculture.”

Robredo pledged “100-percent support” for Duterte’s administration. But whether she gets a Cabinet job is up to Duterte, she said.

A longtime mayor of Davao City, Duterte said that being “rustic,” his “sphere of influence” covered only people he met in school, including friends from his dormitory and his fraternity.

He said he did not socialize in Manila when he held the seat of the city’s first district in the House of Representatives from 1998 to 2001.

Duterte said he was looking to give jobs to “the party guys who have been loyal to me all along and maybe [those] … who were, for one reason or another, a factor in my winning the presidency.” 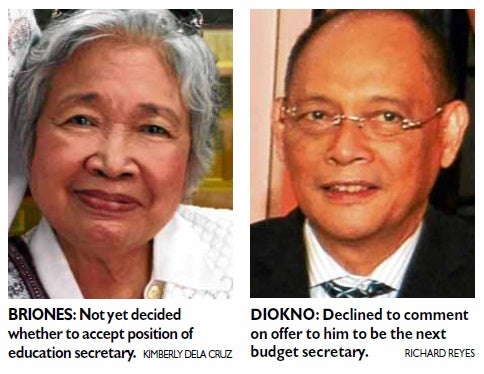 He added, “I should not be looking beyond my borders yet.”

Duterte belongs to the Partido Demokratiko Pilipino-Lakas ng Bayan, while Robredo is a member of the Liberal Party (LP), which campaigned hard to prevent his election. The mayor’s promise to roll out his mailed-fist law-and-order policies in his city nationally, according to President Aquino, was a threat to democracy.

The acid-tongued local politician captivated millions of Filipinos, and enraged his critics, with vows of ruthless tactics to end crime within six months.

Duterte and Robredo, Roxas’ running mate, will be proclaimed today by a joint session of Congress.

Duterte said he had never met Robredo. “I don’t even know who this looming genius in government is,” he said.

He said he was more inclined to give jobs to people he knew well and trusted. “You do not appoint somebody you do not trust. But you also have to know the person, to know enough of his character or his capacity and his honesty,” he said.

Duterte swatted aside criticism he had drawn by appointing his own friends and classmates, a similar knock that outgoing President Aquino had received for putting his close friends in his Cabinet at the start of his administration.

On Saturday, Duterte said he was offering the position of budget secretary to Benjamin Diokno, who held the same post in the administration of President Joseph Estrada.

When reached by the Inquirer on Sunday, Diokno declined to comment on Duterte’s offer.

Duterte also announced that he was offering the position of education secretary to University of the Philippines professor Leonor Briones, who, he said, was “quite familiar” with the problems of the education sector.

In a text message to the Inquirer, Briones, who served as national treasurer in the Estrada administration, said she had not yet decided on whether to accept the offer.

Duterte said in Davao City that Briones had asked to be given up to Tuesday to decide.

“She’s quite familiar with the problem we are facing, the implementation of the K-12 (kindergarten to Grade 12) program,” he said. “A lot of students will be marginalized and will not be able to enroll, and a good number of teachers have also lost their positions. That’s a problem.”

K-12 is the Aquino administration’s flagship education program, adding two more years of high school to the 10-year basic education cycle. The Department of Education rolls out the program this school year.

Duterte said he had also chosen appointees for the defense department, Philippine Drug Enforcement Agency, Land Transportation Office (LTO), Bureau of Internal Revenue and Bureau of Customs, but he did not disclose their names.

He said, however, that his choices for the defense, customs and LTO posts were from the military.

Duterte also said he was still making up his mind about the Left’s nominations to the Cabinet, including for the heads of the Department of Social Welfare and Development and the Department of Agrarian Reform.

Among the positions in Duterte’s Cabinet that are still open are science and technology, health, trade, environment and natural resources, and interior and local government.

As for the tourism job, Duterte said he had yet to make a choice, but thought current Tourism Secretary Ramon Jimenez Jr. was  doing a good job.

“I’m not saying I’m going to get him, but Jimenez is doing a splendid job. He knows his work,” Duterte said.

He said he would be ready to name most members of his Cabinet in a presentation in Davao City on Tuesday afternoon. With reports from Ben O. de Vera in Manila; Juan Escandor Jr., Inquirer Southern Luzon; Dennis Jay Santos, Inquirer Mindanao; and AFP