‘If my plane crashes, don’t worry, Leni to replace me’ – Rody 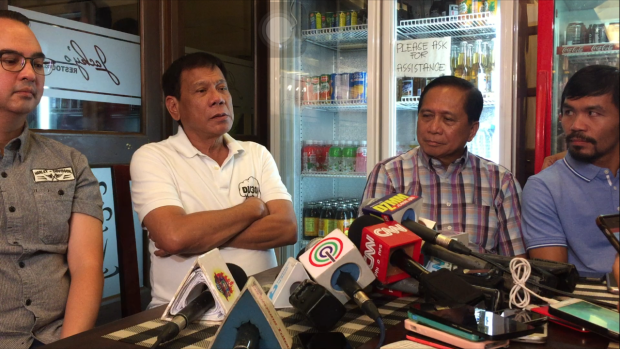 DAVAO CITY –President-elect Rodrigo Duterte said on Sunday that people should not worry if something bad happens to him because of his refusal to be guarded by his security escorts.

Vice President-elect Leni Robredo, he said, is always there to replace him, anyway.

Duterte gave this scenario as he maintained that despite the security risks, he would not bring members of the Presidential Security Group with him in his daily flight from Manila to Davao and back when he starts working in Malacañang.

“Look, the Constitution provides for the Office of the Vice President. Kaya nga tayo may vice president, kapag nahulog ‘yang eroplano ko, meron tayong reserba,” Duterte said in a late Saturday briefing here after his two-hour meeting with Senator-elect Manny Pacquiao, and Senators  Alan Peter and Pia Cayetano and siblings, among others.

Duterte said he sees no risk in travelling daily on a commercial flight with only his executive assistant Bong Go and another staff.

He recalled a time when he tried to send home PSG members guarding his house in Davao City.

After that incident, Duterte said a PSG official asked for his consideration and explained to him that his security escorts must do their job as mandated by law.

Duterte said he told the PSG that they should also understand that he is used to people hugging him, taking pictures with him and “sharing their happiness with him.” AC/rga