Duterte camp says no need for Santiago to concede 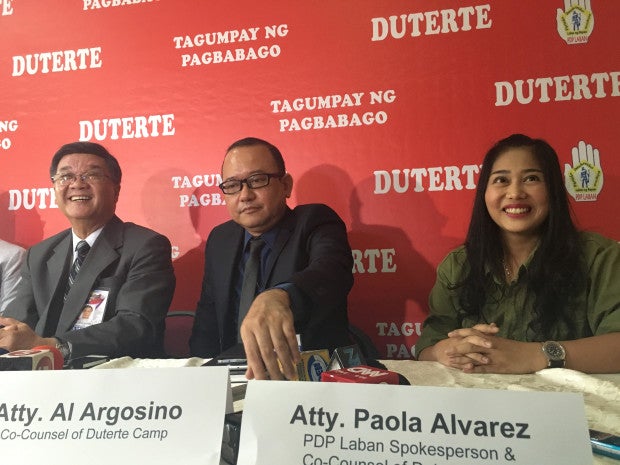 Duterte’s legal team holds a press conference at the House of Representatives on the third day of Congress’ canvassing of votes. YUJI GONZALES/INQUIRER.net

In a seemingly conflicting stand on early proclamation, the camp of presumptive President-elect Rodrigo Duterte on Friday said Congress’ canvassing of votes should be finished first before the mayor can be proclaimed.

“Even if all candidates for President conceded to the win of Mayor Duterte, still it is the constitutional duty of the Philippine Congress to canvass and tabulate the votes, after which that is the only time to proclaim the winning candidates,” Aguirre said at a press conference at the House of Representatives with the rest of Duterte’s legal team.

Panelo on Thursday said Duterte’s rivals should be “statesmanlike” by conceding defeat and foregoing their constitutional right to have their votes canvassed so that the mayor could already be proclaimed and Congress could focus on the hotly contested vice presidential race.

But Aguirre said Duterte could not be proclaimed President even if all candidates conceded defeat unless  Congress was done with the canvassing of votes.

“Hindi na kinakailangang mag-concede dahil kahit naman mag-concede hindi naman ma-i-po-proclaim,” he said.
(There is no need for anyone to concede, because even if they concede, he cannot be proclaimed.)

Partido Demokratiko Pilipino-Lakas ng Bayan (PDP-Laban) spokesperson Paola Alvarez noted that Panelo was affiliated with the Laban ng Demokratikong Pilipino (LDP), and not Duterte’s party. “We are the PDP and Mayor Duterte ran for president under PDP,” she said.

“This is the fastest canvassing in Philippine history. We thought that it would last for about two weeks, but the proclamation of Mayor Duterte could be 10 days earlier than that of President Aquino,” he said.

Mr. Aquino ran for president in the May 10 elections and was proclaimed winner on June 9, 2010. IDL

With 113 certificates of canvass opened, Duterte, the clear winner in the presidential race, was leading the Congress tally as of the second day of canvassing by as many as six million votes.

Read Next
KMP backs Mariano as peasants rep in Duterte Cabinet
EDITORS' PICK
Look Through: The fate of impounded stray dogs
House energy committee chair Arroyo bats for cheap electricity
What to watch out for when selecting a video surveillance solution
23,000 cops to be deployed nationwide for school reopening
Unleash the photographer in you this World Photography Day with vivo smartphones
DOH says COVID-19 cases plateauing, but public shouldn’t be ‘complacent’
MOST READ
Sharon Cuneta asks for prayers for friend in ICU who suffered silent stroke
Korina Sanchez reunites with former ABS-CBN co-anchors Julius Babao, Cheryl Cosim
Light therapy could be the answer to your sleep problems
Solons file resolutions seeking probe on ABS-CBN, TV5 merger
Don't miss out on the latest news and information.