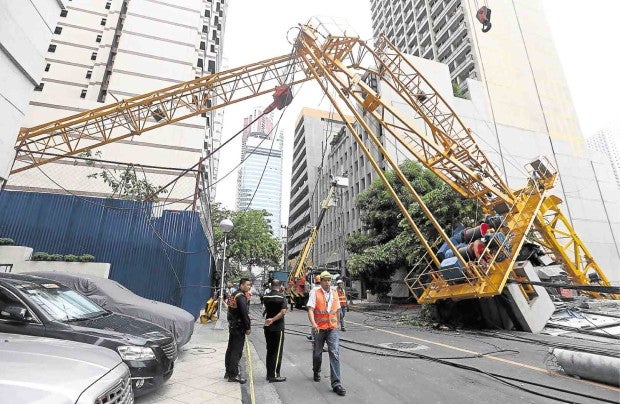 CRASH SITE The accident on HV dela Costa Street also caused a brownout in nearby villages and snarled traffic in the Makati central business district. PHOTOS BY LYN RILLON

The Makati City government ordered an investigation and stopped work at a high-rise construction project in the central business district (CBD) on Thursday, where two persons were injured after a tower crane collapsed, snagged utility cables and sent an electric post crashing down on the street.

The toppled post fell on a taxi cab on HV dela Costa Street, Barangay Bel-Air, leaving the driver with signs of spinal injury. Another man on a bike sustained a fracture on his arm and bruises on his knees and elbows.

The crash happened around 8 a.m. at the Salcedo Sky Suites project site and cut power supply in Bel-Air and neighboring Urdaneta and Guadalupe Viejo. The ensuing closure of HV Dela Costa also caused heavy traffic in the CBD.

The Makati City Disaster Risk Reduction and Management Office (DRRMO) identified the injured driver as Ramon Romirosa, 47; and the biker as Romeo Lopez, 40.

The building contractor, AM Oreta Construction, issued an apology and said it would shoulder the medical expenses of the two victims, who received treatment at Makati Medical Center.

In a statement, the company said the crane was being set up at the residential project when it collapsed and snagged utility cables, affecting five electrical posts and two telecom posts. The crane fell on a vacant lot and hit three parked cars.

Makati Mayor Romulo Peña ordered the Office of the Building Official (OBO) to enforce the work stoppage while investigating the cause of the incident and individuals who should be held liable. “Although nobody died, still there were people injured,” he said. “We will not tolerate negligence and noncompliance with our construction laws and standards.”

OBO Enforcement Unit officer in charge, Engr. Julio Cepeda, said they would check if standard operating procedures were followed by the personnel in charge of the crane and whether it was being installed on soft ground.

Meanwhile, Bel-Air village watchmen told reporters that the crane operator had gone missing after the incident. 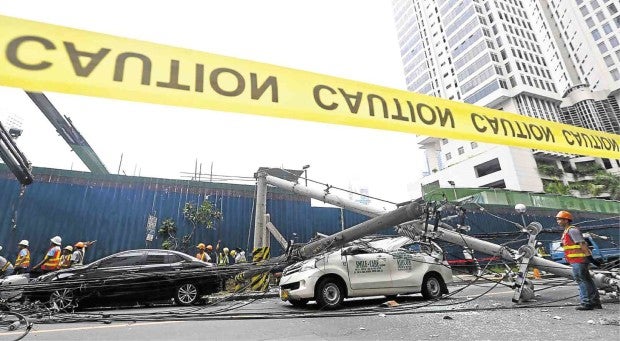 Read Next
Rise of Clark from US base to economic hub drawing praises
EDITORS' PICK
This new condo in the South will make you want to turn a new leaf
Jonel Nuezca, convicted ex-cop, collapses and dies at Bilibid
Legarda: Ending Violence Against Women, a cause for all
Smart offers wireless fiber-like speeds to Filipino homes with country’s first 5G Prepaid Home WiFi
EJ Obiena’s coach rebuffs Patafa ‘witch hunt,’ says he never complained about pay
Google won’t accept election ads for 2022 national polls
MOST READ
Jonel Nuezca, convicted ex-cop, collapses and dies at Bilibid
Bongbong Marcos to face another disqualification case
BioNTech CEO says vaccine likely to protect against severe COVID from Omicron
Carlos vows to let PNP personnel spend time with family during holidays, work near their home
Don't miss out on the latest news and information.