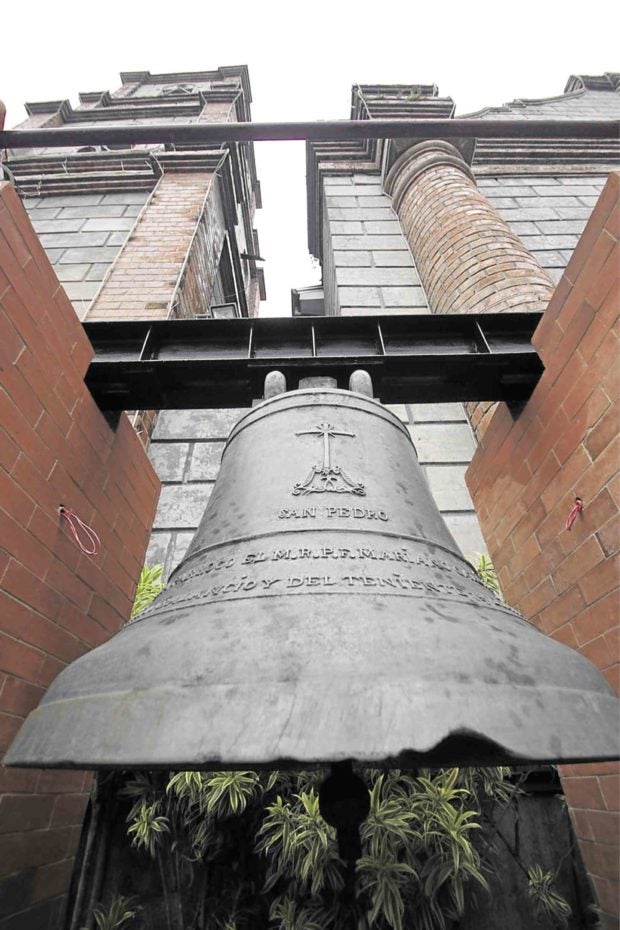 BAUANG, La Union—Few residents of this agricultural town even knew it existed, but many of them trooped to the Church of Saints Peter and Paul on Monday morning to hear the San Pedro bell ring three times.

It was the first time in 115 years that this generation of devotees heard the bell ring, after it was taken to the United States in 1901 at the start of the Filipino-American war.

The bell had been displayed at the Most Holy Trinity chapel of the United States Military Academy (USMA) in West Point, New York, where it had been kept for years.

The USMA shipped the bell back to the Philippines at the request of the Church in Bauang and with the help of an American war veteran.

The 378.3-kilogram (834-pound) bell is now perched on a pedestal outside the church, following a ceremony graced by San Fernando City Bishop Rodolfo Beltran.

“This is a not just an expensive piece of religious artifact… Its historical value is priceless, having gone to war, traveling halfway across the globe to the US in its 183 years of existence,” Beltran said in his homily during a thanksgiving Mass.

“It has now become even more precious not only for the people of Bauang, but all the people in the world,” he said.

The circumstances surrounding the removal of San Pedro bell and its journey to the United States remain lost in history, according to the marker below the pedestal where the bell is now perched.

“Although history did not say the bell was stolen, but was, in fact, kept safe from the ravages of war, the gesture [of returning the bell] follows the principle that we can’t take for ourselves that which doesn’t belong to us,” said retired US Capt. Dennis Wright, who worked for the bell’s return.

He is part of a group of American war veterans who are working to return the historic Balangiga bells, which were also taken by soldiers from the US Ninth Cavalry from a church in Eastern Samar in 1901.

Wright said, “The [San Pedro] bell symbolizes that we are interconnected, [that] we are a part of a global community, even more so with advance of social media. And we all need to be mindful of our interconnectedness with each other, just as one nation. When we hear the bell, we ask not for whom the bell tolls, for it tolls for all of us. It reminds us of interconnectedness of the two countries and the people.”

The success of restoring an American cemetery at the former Clark Air Base emboldened a group of American war veterans to work on the return of the Balangiga bells, he said.

“It was through this research activity that we learned of the existence of another bell in the Philippines, in the USMA in West Point. At that time, there was not much knowledge about the bell. We learned that it was taken by Gen. Thomas Barry to America where it became known as the Barry Bell,” Wright said.

He said Bauang Mayor Martin de Guzman III “must have thought I was crazy” when he was informed about the bell’s existence.

De Guzman admitted that his first thought after learning about the bell was, “Here comes another treasure hunter.”

“We had clues [about the bell’s story]. First was the symbol of the Augustinian cross, the name San Pedro, the year it was presented, which was 1883, the parish priest Mariano Garcia to whom it was presented, the name of its donors—Lt. Governor Mariano Balancio and Lt. Hilario Calica—and the word ‘Bauang’ were inscribed on the bell,” Wright said.

Armed with the limited information, Wright’s group discovered the existence of a town in La Union, which hosted an Augustinian church named St. Peter.

Bauang, already 429 years old, is one of the oldest towns in La Union, which was carved out of Pangasinan, Ilocos Sur and Mountain Province in 1587.

Soon, the veterans were able to determine that the San Pedro bell was removed by American forces stationed in the Philippines in 1901 and taken to the US by Barry, who presented the bell to the USMA in 1915 where it remained for a century.

Beltran said, “In olden times, bells were rung to gather people for weddings, funerals and for Mass. It was also rung when there was a fire in the community, or when there was an impending calamity such as a big storm. People offered a little prayer whenever they heard the church bell peal, in the morning, noontime at twilight. So it was a part of a community.”

In his book, “La Union, the Making of a Province,” author Adriel Obar Meimban said church bells were rung from 1899 to 1900 to transmit coded messages to Filipino revolutionaries to deceive American soldiers.

The colonizing Americans soon barred churches from ringing the bells.

But they again allowed the use of church bells to summon schoolchildren when they introduced public education in the country.

Over the next decades, the origin of the bell and much of its history had become obscured until 2015 when Wright realized it belonged to the church of this town.