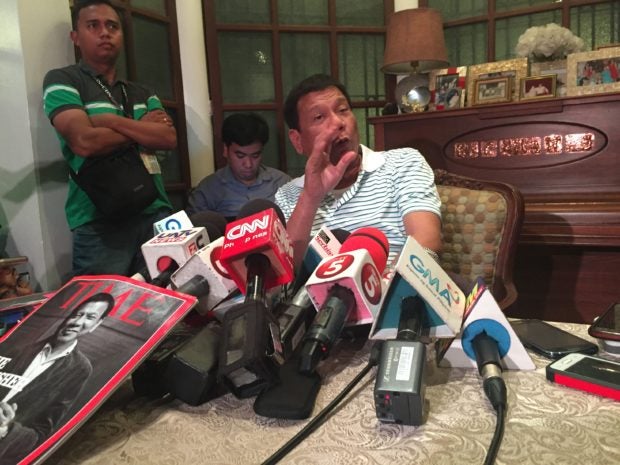 DAVAO CITY— Presumptive President Rodrigo Duterte on Monday said he was saddened by the death of five concertgoers in a Pasay City concert on early Sunday morning.

“I am sad that it had to end that way,” Duterte said in a press briefing.

On Sunday, at least five people, including an American national, died after they collapsed on the concert grounds at the open parking area of a mall in Pasay City.

Initial investigation showed the fatalities were under the influence of alcohol when brought to hospitals for treatment. Authorities are also investigating the possibility of drug use.

Quoting news reports, Duterte said “there is nothing definitive” that there was a foul play.

Since he is not yet officially proclaimed as president, he said he could only give his thoughts on the incident.

He said the Pasay police have the jurisdiction over the incident but he said that the National Bureau of Investigation (NBI) and the Philippine Drug Enforcement Agency (PDEA) could help if drugs were indeed involved.

“If there is an indication of drugs, the PDEA and maybe the NBI would want to pitch in,” he said.

He said that drugs are given (pinagpapasapasahan) like candies during music concerts or outdoor dance parties.

While he said that the government could not prevent people to assemble, he said strict regulation is very important.

“We cannot prohibit to assemble in a certain place, crowd together but we can always regulate,” he said.

In cases like this, he said he would “scatter government security to smell around and arrest immediately” people who are suspected of using illegal drugs.