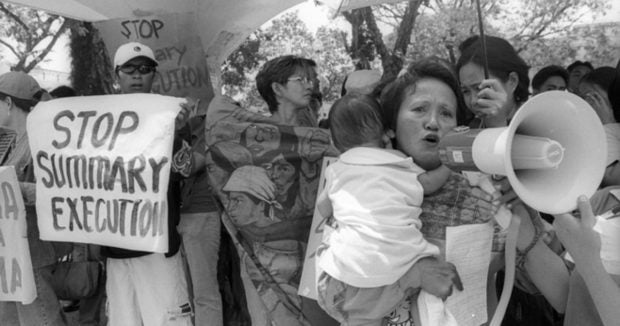 Clarita Alia speaks out against death squad killings at a rally in Davao City in December 2003. From July 2001 to April 2007, her four sons–Richard, 18, Christopher, 17, Bobby, 14, and Fernando, 15–fell victim to apparent death squad killings. The police have not arrested a single suspect in any of the killings. PHOTO COURTESY OF HUMAN RIGHTS WATCH/Ryan Anson

A US-BASED human rights group on Sunday denounced the decision of the Department of Justice to stop its investigation into the Davao death squad (DDS),  calling it a “disturbing failure to address extrajudicial killings across the Philippines which are linked to the government.”

“The decision sends a chilling message that those responsible for targeted killings don’t need to fear being punished for their egregious crimes,” Phelim Kine, deputy director for Asia division of Human Rights Watch, said in an e-mailed statement.

The Davao death squad is a vigilante group in Davao City linked to presumptive President-elect Rodrigo Duterte, the former mayor. It was believed to be behind summary executions of 1,424 victims in Davao City from 1998 to 2015.

Human Rights Watch reported that in 2009 and 2014 it investigated some of the hundreds of murders—including of children as young as 14—by death squads in Davao City, Tagum City and elsewhere in the Philippines.

It said it uncovered compelling evidence that officials and police were directly involved in the crimes.

Outgoing Justice Secretary Emmanuel Caparas, however, announced that the government was at a dead end in its investigation into the DDS citing the lack of evidence after a key witness disappeared.

Caparas said the DOJ’s investigation could not proceed because the sole witness, a self-confessed hit man,  had left the government’s witness protection program.

“There’s really nothing there. I don’t think the witness is there any more … because he hasn’t surfaced again,” Caparas said.

“Unless that (person) comes forward, it’s very difficult to do anything about it,” he told reporters.

“From all indications, the decision of the witness to leave [the protection program] was definitely in reaction to Duterte’s [likely] victory,” De Lima said.

Duterte had vowed that once elected, he would kill 100,000 criminals and dump their bodies in Manila Bay so the “fish will grow fat” from feeding on them.

Kine urged the Philippine government to reopen its investigation into the Davao death squad, saying it had obligations under Philippine and international laws to bring to justice those responsible for the extrajudicial killings.

“They have no place in a rights-respecting democratic society,” Kine said.

“Law enforcement has a duty to uphold the law and it should demonstrate its determination to do so,” Kine added.

But for  local human rights group Karapatan, establishing a case against the DDS was a challenge.

“We cannot agree with the Department of Justice right away because I don’t have any idea of the circumstances of the case … But as much as we can tell, it is difficult to build a case,” Cristina Palabay, Karapatan secretary general, said in a phone interview. With an AFP report