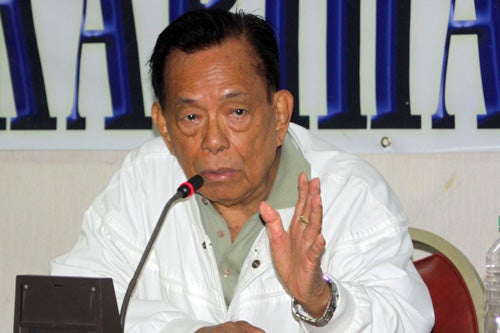 Pimentel said PDP-Laban, which he founded in 1982 and which is now Duterte’s party, had adopted the incoming president’s federalism proposal.

The federal form of government being pushed by Pimentel will see the retention of congressional districts as well as the election of 66 senators to represent 11 federal states—four in Luzon, four in the Visayas and three in Mindanao.

In Luzon, there will be the federal states of Northern Luzon, Southern Tagalog, Bicol and Central Luzon while Metro Manila will be considered not a federal state but a federal capital like Washington DC in the United States, Pimentel said in a phone interview.

As for the central government, it will handle only government functions “with national implication” such as national defense and the administration of justice, he said.

Pimentel said he had not yet talked with Duterte about the federalism the latter was envisioning under his administration.

During the campaign, Duterte promised that if elected president, he would start early the process of amending the Constitution to adopt the federal form of government that he said would bring peace to Mindanao.

Pimentel acknowledged that a federal form of government would help bring peace not only to the Moro Islamic Liberation Front and Moro National Liberation Front but to other Muslim factions and armed groups in Mindanao as this would address all their concerns.

“Federalism will transfer, let us say, most of the vital services to the hands of federal states rather than remaining in the hands of the central government,” Pimentel said.

Pimentel said the federalism proposal he was pushing will adopt the “best features of successful experiments of federal system of government” like the United States and European nations.