P50M in terminal fees is missing 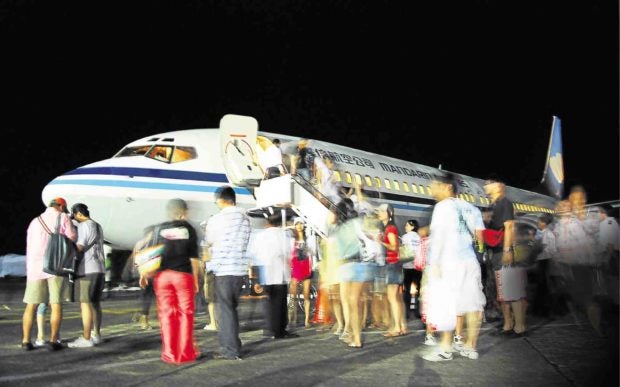 AS EARLY as 2008, the Kalibo airport is already one of the country’s busiest airports as shown by the arrival there of an inaugural flight of a Taiwanese airline company that brought in tourists bound for the resort island of Boracay, world famous for its white sand beach and the Philippines’ top tourist destination. JOHARESH TANODRA/CONTRIBUTOR

ILOILO CITY—Eleven contractual workers at the Kalibo International Airport (KIA) have been fired after at least P50 million in terminal fees, that the workers were supposed to have collected, have been declared missing.

A regular employee is also facing administrative proceedings over the nonremittance of the fees, according to Rodante Joya, deputy director general of the Civil Aviation Authority of the Philippines (CAAP).

“They could face a plunder charge,” Joya said.

Josephine Repiedad, a regular employee designated as collection officer, is facing administrative proceedings at the CAAP’s hearing and adjudication board.

Repiedad would also be suspended for 90 days without pay pending results of the proceedings to determine the employee’s degree of culpability, Joya said.

Reached by the Inquirer, Repiedad denied involvement in any irregularity.

“I only receive daily collection reports. I do not collect terminal fees,” she said in a phone interview.

She said she could have been implicated because she was the collection officer.

Repiedad has been working with the CAAP (formerly Air Transportation Office) for 38 years.

The KIA, which caters mainly to tourists bound for the world-famous Boracay Island, is the country’s fourth busiest airport next only to airports in Manila, Cebu and Davao.

Those involved in the scam collected discarded terminal fee tickets and reissued these to passengers and pocketed the money, Joya said.

The number of passengers of international flights at KIA reaches about 2,000 daily. This would mean a daily collection of P1.5 million at P750 per passenger.

At least P10 million in collections are unaccounted for from January to February this year alone, according to an initial CAAP audit.

“From October, more than P50 million (is accounted for). That’s plunder already. That’s why we have started the proceedings,” Joya said.

He said the investigation would go back to May 2015 when terminals for international and domestic flights were separated at KIA.

Investigators may even review terminal fee collections as far back as 2013.

“We want to know when this started and who are involved so they can face justice,” he said.

The irregularities were uncovered only early this year by an internal audit team which reviews the finances of all the 41 airports in the country.

But he said the investigation would go up the ladder to determine “supervisory responsibility” and if there was gross neglect of duty by airport officials.

Those suspected to be involved in the scam have roused suspicion from other employees due to their extravagant lifestyle with some owning luxury vehicles and others betting large amounts in cockfights.

“We welcome the investigation and the case filed against them so those who are not involved will be cleared. Our image as CAAP employees in Kalibo has been damaged,” said an employee who asked not to be identified.