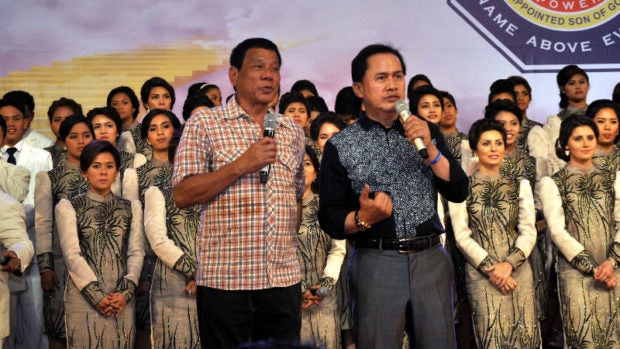 DAVAO CITY—The campaign spokesperson of presumptive President-elect Rodrigo Duterte on Friday apologized to evangelist Apollo Quiboloy, who had alleged being snubbed by the camp of the incoming chief executive.

“We extend our apologies,” Peter Laviña, now the spokesperson for Duterte’s transition team, told reporters at a press briefing here. “Hopefully, we can adjust accordingly.”

Laviña said there was no “deliberate effort” to ease out Quiboloy from Duterte’s core group.

“These are not intentional. We wanted to accommodate everyone and of course we want to consult everyone. This is a continuing process,” he said.

“Some were not entertained and we received this feedback and we are happy that we are receiving this feedback so they can adjust.”

On Friday, spokesperson Mike Abe said Quiboloy and Duterte had no “official communication” after the May 9 elections, and the pastor had not been consulted about the appointees of the incoming administration.

Quiboloy’s spokesperson said the pastor wanted to talk to Duterte but he had not been able to do so.

“Hinaharang ng mga taong nakapaligid sa kanya (He has been prevented from seeing Duterte by the men around him),” Abe said.

But Laviña said Duterte and Quiboloy had been friends for a long time and he hoped the two could meet soon.

“They are good friends. They have been friends for a long time. I’m sure they can find a way to meet as soon as possible—not only as friends—the mayor may want to consult Pastor Quiboloy on some of the nominees he has already named and some who are not yet named,” Laviña said.

He said the staff members of Duterte were just “overwhelmed” by the number of well-wishers.

“We did not expect that so many and they were not prepared,” Laviña said.

Laviña said Duterte was just taking his rest after receiving a number of well-wishers during the past days.