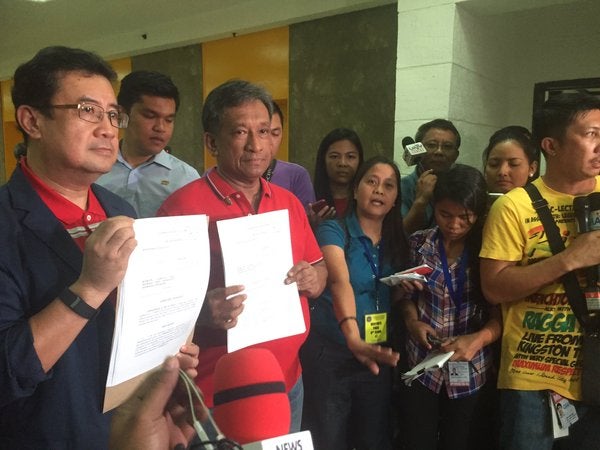 The camp of Sen. Ferdinand “Bongbong” Marcos Jr. on Friday filed a criminal case against Smartmatic and Commission on Elections (Comelec) officials for allegedly violating the Automated Election System Law or Republic Act No. 9369.

Marcos was not among the complainants but lawyer Jonathan de la Cruz, campaign adviser of the vice presidential candidate and Abakada party-list, filed the 14-page complaint on his behalf.

(I was the only one who filed the complaint. As a lawmaker, I need to understand the violations against a law so that when the time comes for the next automated elections we already know the changes we need to make in our laws.)

The respondents supposedly violated the law prohibiting interfering with “the generation, transmission of election results, data or information and gaining or causing access to, using, altering and destroying computer data, program and system software, network, or any computer-related devices, facilities, hardware or equipment, whether classified or declassified.”

On the night of the May 9 elections, Garcia supposedly altered the script in Comelec’s transparency servers to correct the “ñ” in the names of the candidates.

Both Smartmatic and Comelec have claimed that the change will not affect the results of the votes.

The complaint was based on the written report of the incident by William Yu, Parish Pastoral Council for Responsible Voting IT director; separate reports of Peñalba and Moreno to the Commission, as well as various newspaper articles reporting the incident regarding the introduction of a new script to the transparency server.

De la Cruz said that from the information they gathered, the Comelec en banc was not notified of the issue and did not authorize Smartmatic to tweak the script of the transparency server.

Marcos is in a close fight for the vice presidency with Camarines Sur Rep. Leni Robredo, who is leading the race. His camp claimed that after the new script was introduced on the night of the elections, it affected the results of the votes in favor of Robredo.

On Wednesday, the Marcos camp filed a demand to the Comelec to allow their IT experts to check their transparency servers.

De la Cruz clarified that the complaint did not allege cheating but was meant to find out the truth.

“This is an accusation of irregularity. Whether or not this irregularity affected the results remains to be seen if our request for a system audit is granted by the Comelec,” said Jose Amor Amorado, head of Marcos’ legal team. IDL/rga/RC