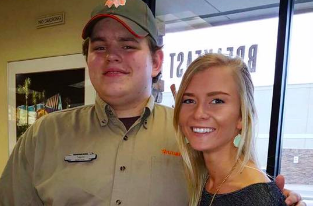 Faith in humanity was restored indeed, after hungry customers at Whataburger fastfood chain in Denton, Texas, were photographed showing kindness towards a cashier with hearing impairment.

A lengthy post from Facebook user Kolbe Sanders earlier this week, detailed how a long line of buyers patiently jotted their orders on a piece of paper, upon knowing that their server, Taylor Pope, was deaf and was just using cochlear implants.

According to Sanders,  she was standing in line with her boyfriend inside the popular fastfood joint, when she noticed that the line was pretty long and didn’t appear to be moving.

“That’s when I notice the cashier talking to a young couple in front of me,” Sanders wrote. “The girl ordered her food and the cashier just looked at her, smiled, and very faintly said, ‘I am deaf, can you please talk slower.’ The girl lit up and said, ‘Oh, of course!’”

The 20-year-old lad, however, still couldn’t quite understand her and instead asked the customer to write down her order.

“They did so without hesitation,” she wrote. “Without a sign of impatience, just pure joy and genuine kindness to be helping that young working man do his job.”

The astonished customer further revealed that every customer after the couple patiently wrote down their order by hand, without anyone making a big fuss over it. She continued to observe the line, even after her food was served.

“I was surprised because not one person acted rude or impatient. Every customer complied with him and wrote down their orders without any complaints, just smiling back at him,” Sanders said.

Sanders ended her moving post, with a lovely sentiment. “After seeing so many people bully others on a daily basis, I can’t tell you how refreshing it was to see these small acts of kindness demonstrated from so many different people. Seeing people forget their pride or their problems or even their hunger is something you don’t see often. But at the end of the day, it’s about others, not ourselves.”

“I think it’s wonderful,” she was quoted saying. “More of the fact that Kolbie took the time to write that and being so observant for what’s going on. For Taylor, it gave him a sense of pride that the hard work he’s done is paying off for him. He’s struggled in the past to fit in, so it’s great.”

The elated mother added: “It’s been hard. He’s totaled his car and taking an Uber right now. It’s being the protective mom in me, wanting the best for him. Whataburger’s been really great for him, but he kind of wants to go beyond that.”

Taylor had recently been promoted to team leader, according to the report, and is working hard in hopes of becoming manager. Khristian Ibarrola