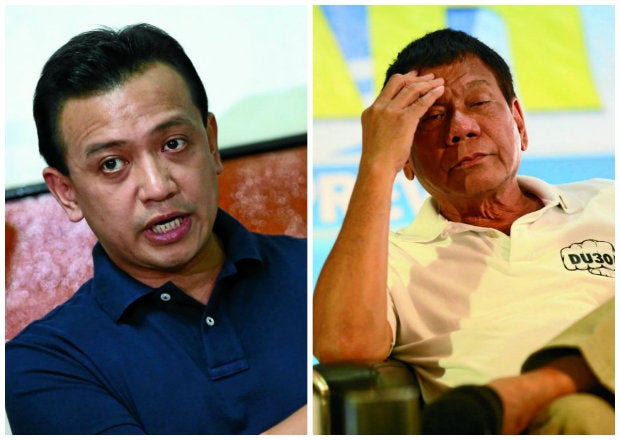 Senator Antonio Trillanes IV vehemently denied on Friday that he was part or even planning any coup d’etat against presumptive President-elect Rodrigo Duterte, saying the proper way of removing the latter, in case he violates the Constitution, would be through impeachment. INQUIRER FILE PHOTOS

Senator Antonio Trillanes IV vehemently denied on Friday that he was part of or even planning a coup d’etat against presumptive President-elect Rodrigo Duterte, saying the proper way of removing the latter, in case he violates the Constitution, would be through impeachment.

“Let me categorically state that I am not part of or even planning any coup d’etat,” Trillanes said in a statement.

“Presumptive President Duterte was duly elected by the people and the proper way of removing him from office, in case he violates the Constitution, is through impeachment.”

“However, in the unlikely scenario that there would be a coup by disgruntled members of the AFP/PNP in the future, it would only be because they couldn’t stand the sight of Joma Sison and his communist buddies being part of a coalition government after remorselessly killing tens of thousands of soldiers, policemen and innocent civilians in pursuit of their universally discredited ideology,” the senator added.

Trillanes, a former Navy officer, issued the statement in response to a reported warning of Communist Party of the Philippines founder Jose Ma. Sison that Duterte should watch out for coup d’etat and assassination plots by disgruntled military officers supposedly supported by the senator.

“The Trillanes gang has declared war on Duterte. Upon assumption of office as President and Commander in Chief, [Duterte] has to deliver decisive blows on this tiny gang,” Sison was quoted as saying.

During the campaign period, the senator accused Duterte of  having at least P2.4 billion in various banks. He also filed a plunder case against the incoming President at the Office of the Ombudsman for alleged ghost employees in Davao City.