Hillary Clinton: Trump is “not qualified” to be President 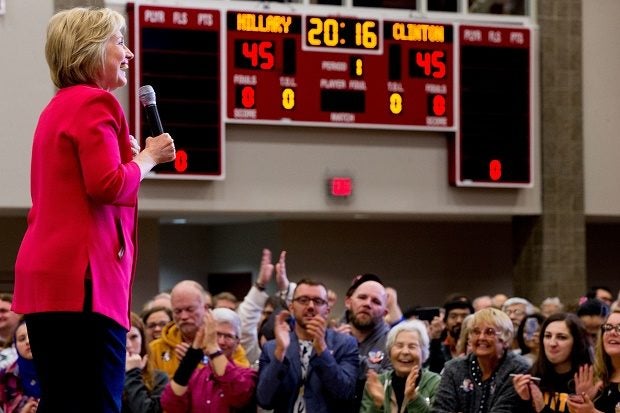 A score board reads “Hillary Clinton 2016” as Democratic presidential candidate Hillary Clinton speaks at a get out the vote event at Transylvania University in Lexington, Ky., Monday, May 16, 2016. AP

DES MOINES, Iowa — Hillary Clinton had some of her strongest words yet for presumptive Republican nominee Donald Trump, saying Thursday that he is “not qualified” to be president of the United States.

In an interview with CNN, the Democratic front-runner and likely nominee questioned Trump’s ability to handle complex foreign policy challenges, decrying what she described as his “irresponsible, reckless, dangerous comments.”

Clinton cited recent comments from Trump criticizing Great Britain, praising the leader of North Korea and questioning America’s membership in the North Atlantic Treaty Organization, or NATO. She said she knows “how hard this job is” and added that she had “concluded he is not qualified to be president of the United States.”

Trump responded Thursday on his website, saying Clinton “has bad judgement and is unfit to serve as President at this delicate and difficult time in our country’s history.”

Looking ahead to the general election, Clinton asserted that she “will be the nominee” for the Democratic party, noting her lead in delegates and votes over her Democratic opponent Bernie Sanders.

“That is already done in effect. There is no way that I won’t be,” said Clinton, who is 90 delegates short of clinching the nomination, though Sanders continues to win contests and has vowed to march on to the Democratic convention in July.

READ: Is Hillary Clinton a sure thing for the White House?

On divisions among Democrats, Clinton said she was committed to party unity, but argued that Sanders will also have to play a role in bringing Democrats together. She recalled that in 2008, after losing the primary to President Barack Obama, she endorsed him and campaigned for him.

“Whatever differences we may have, they pale in comparison to the Republican nominee,” Clinton said.

Asked if she should reach out to Sanders to work things out, Clinton said: “I am absolutely committed to doing my part. But Sen. Sanders has to do his part.”

She declined to say whether she’d consider Sanders for her running mate if she wins the nomination.

Sanders spokesman Michael Briggs disputed the suggestion that the primary race was over.

“In the past three weeks voters in Indiana, West Virginia and Oregon respectfully disagreed with Secretary Clinton,” he said in a statement. “We expect voters in the remaining nine contests also will disagree. And with almost every national and state poll showing Sen. Sanders doing much, much better than Secretary Clinton against Donald Trump, it is clear that millions of Americans have growing doubts about the Clinton campaign.”

Clinton said she was ready to take on Trump, but vowed to keep the conversation focused on issues and her record, rather than personal attacks.

“He can say whatever he wants to say,” she said, later adding that if “you pick a fight with a bully, you know, you are going to be pulled down to their levels.”

Clinton said she would not engage with Trump when he takes shots at her husband, former President Bill Clinton.

“No, I know that that’s exactly what he’s fishing for. I’m not going to be responding,” Clinton said.

Clinton also spoke about the EgyptAir Flight 804, which crashed into the Mediterranean Sea early Thursday, saying it “does appear it was an act of terrorism” and it “shines a very bright light on the threat that we face.”