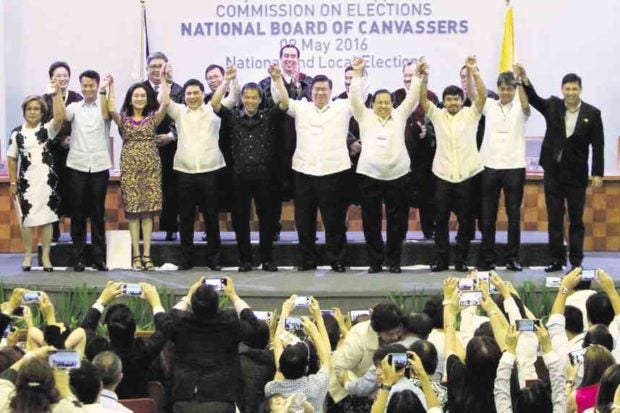 After a grueling count of the votes, the Commission on Elections (Comelec) on Thursday proclaimed the 12 winners in the senatorial race, including five newcomers who expressed openness to presumptive President-elect Rodrigo Duterte’s plan for a shift to the federal form of government, but were divided on his proposal for the return of the death penalty.

After a nine-day count of the votes by the Comelec serving  as the national board of canvassers, the five newbies were proclaimed winners together with old-timers Franklin Drilon, Vicente Sotto III, Panfilo Lacson, Richard Gordon, Ralph Recto, Francis Pangilinan and Miguel Zubiri.

Macalintal said he had given the wrong date for the proclamation to Sotto, who was out of the country.

All the winners arrived at the Philippine International Convention Center (PICC) with members of their families and friends for their proclamation.

Some people were seemingly disappointed when Pangilinan and Recto showed up without their celebrity wives.

Pangilinan explained to inquiring reporters that his wife, singer-actress Sharon Cuneta, was on a taping. “Somebody has to earn while I am here,” he said in jest.

There was no word from Recto as to the whereabouts of his wife, movie actress Vilma Santos, who won her run for the seat of the 6th district of Batangas province in the House of Representatives.

But the crowd at the PICC was buoyed when Pacquiao, the world boxing champion turned politician, arrived with his wife, Jinkee, and their two sons, Michael and Jimwell.

Before the proclamation ceremony, people asked for selfies with the new senator, while Comelec employees were content to get a few snapshots of him from afar.

De Lima was a celebrity on her own, drawing the loudest cheers from the crowd, next to Pacquiao, when she was officially named senator-elect.

The Comelec went ahead to proclaim De Lima despite a petition by the 13th placer in the senatorial race, former Metropolitan Manila Development Authority Chair Francis Tolentino, to the Supreme Court to stop the poll body from proclaiming the last three winning senators, claiming irregularities in the vote count.

In proclaiming De Lima, the Comelec said the remaining 1,211 uncanvassed votes would no longer materially affect the ranking of those in the Top 12 slots, including De Lima.

Zubiri, who came with his wife, Audrey, and their three children, said his victory was a vindication of sorts for his “rough and tumble” political career.

Zubiri was proclaimed winner in the senatorial election in in 2007 but he resigned in 2011 when it became clear that he benefited from fraud. He ran again for the Senate in 2013, but lost.

Zubiri said he was open to discussion on  Duterte’s federalism proposal, which he believed would promote competency and efficiency in the country, but might change his mind about his original stand for the reinstatement of capital punishment.

“I am open to the possibility of not allowing it if, and only if, we can come up with a national penitentiary where there is full isolation of prisoners,” he said.

Hontiveros, who vowed to push for better healthcare for  higher compensation for barangay health workers, said the eventual shift to a federal government was welcome, but she would fight against the reimposition of the death penalty.

“What the people can expect from me as I work in the Senate is to help make it stronger and independent, especially when there is a need for a check and balance in any overreach whether on the part of the executive or any branch of the government,” she said.

Pacquiao was reluctant to make known his position on  federalism, but he minced no words in voicing his assent to the reinstatement of the death penalty.

“I support death penalty as long as our laws are in order because death penalty is biblical. Read Romans 13,” he said, referring to Paul’s epistle on submission to the authorities.

Villanueva, the son of evangelist Eddie Villanueva, also said he supported the reimposition of the death penalty.

“I am for the death penalty, believe it or not as long as our justice system works, which is very crucial,” he said.

Villanueva, who turned in  a strong showing in the senatorial race, described his victory as a vindication after being hounded for years by allegations linking him to the pork barrel scam.

De Lima said her stand against the return of capital punishment would not change.

But like Recto and Gordon, De Lima said that she was open to Duterte’s proposal for federalism.

“I’m open to it, but I cannot really give my commitment until I see the whole proposal,” she said.

Recto and Gordon said they might support the restoration of capital punishment, but only for heinous crimes.

“I think it’s important that we help the new administration, the new President. Let’s be cooperative as much as possible, as much as we can,” Recto said.