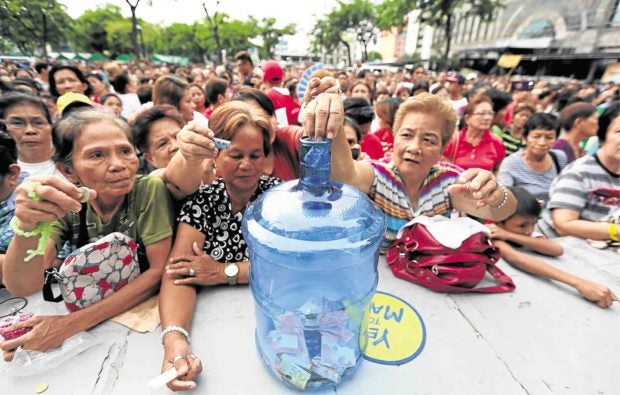 FUNDING A PROTEST In a rally on Thursday at city hall, supporters of Makati Mayor Romulo “Kid” Peña put their money where their mouth is, digging deep into their pockets to contribute to his electoral protest fund as he prepares to question in the Comelec the recent win of Rep. Abby Binay in the mayoral race. GRIG C. MONTEGRANDE

Through the “Piso Para sa Pagbabago For Manual Recount” campaign, Peña’s camp aims to raise at least P10 million to finance the conduct of a manual recount in the Commission on Elections (Comelec).

“I collected money from my neighbors who wanted to help Mayor Kid. We volunteered to give [what we could] because we want change here in Makati,” said Jocelyn Cabusora, a resident of Barangay Pitogo who was carrying a 500 ml water bottle full of coins and P20 bills.

During yesterday’s show of support for Peña, people dropped off their donations, enough to fill about 10 five-gallon water containers. In Barangay Cembo alone, residents said they donated about P12,000.

The pro-Peña crowd earlier held a rally also at the city hall grounds on May 12.

Peña told the media that he was overwhelmed by the response. “People gave their P1 donation for our cause and there are also supporters who sent us checks worth P100,000,” he said.

According to him, his electoral protest against Rep. Mar-Len Abigail “Abby” Binay will be accompanied by documentary evidence like photos, videos and statements from around 3,000 witnesses who alleged that there was cheating during the mayoral elections.

Peña’s camp earlier said that around 36,000 votes cast in his favor were counted for Binay.