Will you bid P5,000 for this eggplant harvested in New Zealand? | Inquirer News
Close
menu
search

Will you bid P5,000 for this eggplant harvested in New Zealand? 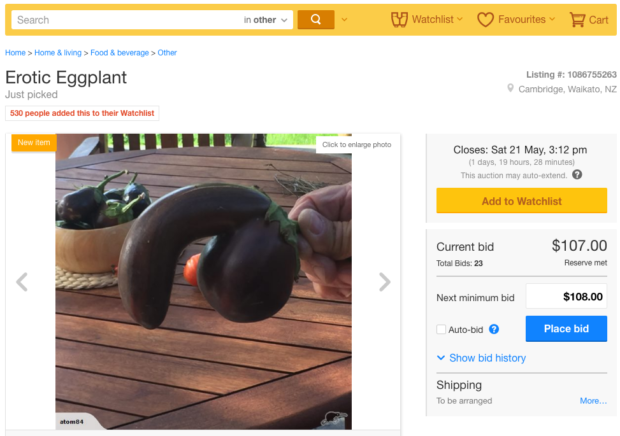 The current bid for the peculiar-looking vegetable leaped to 107 New Zealand dollars (PHP 3,373) even though the auction will end on Saturday. According to the New Zealand Herald, the user planned to sell the penis-shaped vegetable, which was harvested on his dad’s farm in Waikato, Hamilton.

“He thought it was hilarious, and my wife and I found it pretty funny too,” said the seller in an interview with the news site.

He and his family thought ‘long and hard’ about which charity they would donate the funds from the online bidding to. They selected the New Zealand Prostate Cancer Foundation, in honor of a close friend who passed away due to the said disease.

“It was a happy coincidence that the eggplant had that shape,” he further elaborated.

The eggplant, which measured 10 centimeters, is lovingly enveloped in a refrigerator and is still in good shape.

This is not the first time people went eccentric over ”weird-shaped” produce. In a report by Huffington Post, a woman from San Diego, California, was lucky to find a penis-shaped pear last September. In the United Kingdom, another farmer grew a strawberry fruit that was intriguingly shaped like a penis. Gianna Francesca Catolico