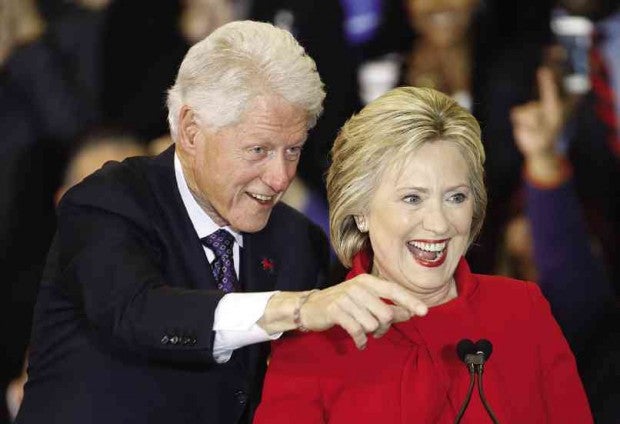 Clinton’s wife, former Secretary of State Hillary Clinton, is the front-runner for the Democratic nomination and Trump’s likely opponent in the November general election.

In an interview with Fox News Channel host Sean Hannity, Trump was answering questions about an unflattering story published this past weekend by The New York Times involving his relationships with women when he turned his attention to Bill Clinton.

“By the way, you know, it’s not like the worst things, OK,” Trump said. “You look at what Clinton’s gone through with all of the problems and all of the things that he’s done.”

Hannity went on to question whether the newspaper would interview women including Juanita Broaddrick, Paula Jones and Kathleen Willey. All three have accused Bill Clinton of sexual misconduct.

In response to the exchange, Clinton spokesman Nick Merrill said in a statement: “Trump is doing what he does best, attacking when he feels wounded and dragging the American people through the mud for his own gain. If that’s the kind of campaign he wants to run, that’s his choice.”

Allegations of womanizing, extramarital affairs and abuse have trickled out over the course of Bill Clinton’s political life, including what his campaign referred to as “bimbo eruptions” when he first ran for president in 1992.

In 1998, he agreed to an $850,000 settlement with Jones, an Arkansas state worker, who had accused Clinton of exposing himself and making indecent propositions when Clinton was the state’s governor. The settlement included no apology or admission of guilt.

Broaddrick, a nurse, in 1999 claimed she was raped by then-state Attorney General Clinton at a Little Rock hotel in 1978. Kathleen Willey, a White House volunteer, claimed Clinton fondled her when she met privately with him at the White House in 1993 to seek a job.

Clinton denied the allegations by Broaddrick and Willey.

Trump has made clear in recent weeks that he intends to make Bill Clinton’s sexual history a key campaign issue, describing him at rallies and on social media as “the worst abuser of women in the history of politics” and labeling his wife an “enabler.”

Hillary Clinton has refused to respond to Trump’s comments, at one point telling reporters she had “nothing to say” about Trump “and how he’s running his campaign.”

Read Next
Mob burns Venezuelan man alive over $5 as rule of law fails
EDITORS' PICK
Seventh judge assigned to handle De Lima case
Beyond water service: Maynilad builds massive infrastructure projects to clean up Metro Manila waterways
Timeless Elegance in the Philippines’ Most Distinguished Home Kitchens
Museums ‘put to sleep,’ churches closed amid volcano’s unrest
PH preps for China virus: Question of when, not if
SM continues to send relief assistance to remote towns in Batangas
MOST READ
Lacson on Duterte’s threat to end VFA over Bato’s canceled visa: Where is the connection?
Part of Aurora Boulevard in Cubao closed from Jan. 25 – Feb. 1
No Bato visa, no VFA–Duterte
Corruption worsens: PH falls 14 notches to 113th spot in global index 2019
Don't miss out on the latest news and information.