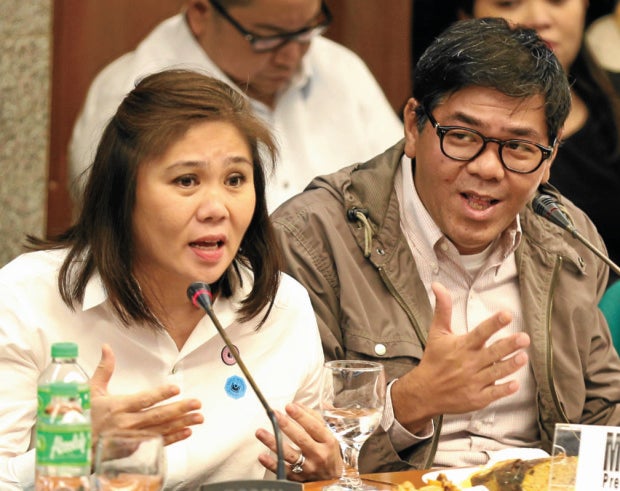 Salud Bautista and Michael Bautista of Philrem Service Corporation at the Senate Blue Ribbon Committee inquiry into the laundering of $81 million stolen from Bangladesh Bank which was deposited into bank accounts in RCBC’s Jupiter branch in Makati City. At right is businessman William So Go.
INQUIRER FILE PHOTO/LYN RILLON

Officials of the Philrem Service Corp. have asked the Senate to be excused from its ongoing investigation into the alleged $81-million money laundering controversy, citing the cases that have been filed against them as well as their scheduled “summer holiday commitment” with their children.

The Senate blue ribbon committee resumed its hearing on the issue Thursday at a hotel on Roxas Boulevard in Manila.

In their letter to the committee chair, Senator Teofisto Guingona III, dated May 16,  Philrem president Salud Bautista and husband Michael Bautista, the firm’s treasurer, cited the cases filed against them by the Anti-Money Laundering Council (AMLC) and the Bureau of Internal Revenue before the Department of Justice as reasons why they should be excused from the Senate probe.

“We understand that the filing of the cases was precipitated by our participation in the Senate blue ribbon committee hearings,” they said in the letter.

“We believe that the answers we have given during said hearings are now being used to support the accusations against us in the above-mentioned cases.”

The couple said they had also been interviewed by the officers of Bangko Sentral ng Pilipinas and were informed that complaints for violations of BSP rules and regulations are also being prepared against them.

They have also been informed, they said, that there is an ongoing investigation being conducted by the National Bureau of Investigation which might lead to the filing of more criminal cases against them and Philrem.

“By reason of all the foregoing, we were advised by our counsel against entertaining further invitations from the media for interviews as well as from talking about the incidents subject of this case to anyone other than those authored by the lawful authorities such as courts and other government entities,” the Bautistas said.

It was for the same reasons that the couple asked the committee that they should “no longer be compelled to appear, testify and produce evidence” before it.

“We invoke the same protections with respect (to) the request to produce our accountant and waive the right to confidentiality of phone records,” they said.

“As such, we regret that we cannot accede to these requests on the ground that they may violate our right against self-incrimination and our right to privacy.”

Senator Serge Osmeña III threatened at the last hearing to cite the Philrem president in contempt for refusing to reveal the name of its accountant.

The couple said the scheduled hearing also coincided with a “summer holiday commitment we have made to or children.”

“Our participation and involvement in the past hearings, including the preparations that we had to make thereof, have already taken so much time away from our performance of our obligations as parents,” they said.

“After having already given our very best to be truthful and to shed light on these events, we are now appealing on humanitarian grounds to be allowed to be excused ourselves from any further participation so that we can be allowed to attend to the needs of our children,” they further said. IDL/rga