Selfie protocol drawn up after near fall of Mayor Rody 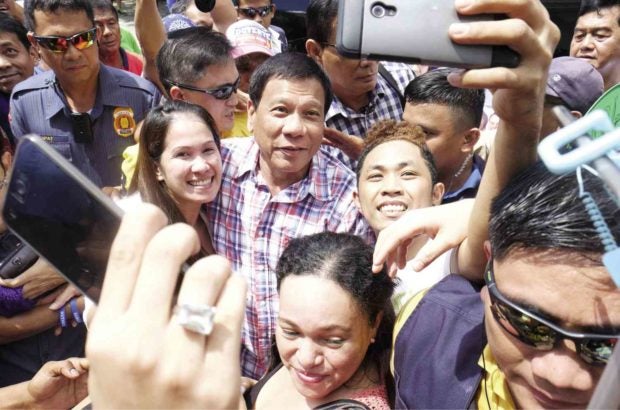 SELFIE SENSATION Davao City Mayor Rodrigo Duterte obliges supporters with a selfie during a campaign sortie in Rizal province in March. Under a new protocol, such close contact with the presumptive President-elect is no longer possible. GRIG C. MONTEGRANDE

DAVAO CITY—Change is coming—even for presumptive President-elect Rodrigo Duterte who has always prided himself on being accessible to common folk.

But a near fall for Duterte on Tuesday after well-wishers mobbed him for a selfie resulted in a change in protocol meant to ensure his safety and security.

A strict screening process, a holding room for the media, a by-appointment-only access and a limited number of guests at any one time were some of the changes that police authorities planned to implement at the Matina Enclaves where Duterte has been receiving well-wishers and visitors.

Chief Insp. Milgrace Driz said the new protocol was meant to avoid a repeat of the Tuesday incident and to regulate the number of people getting near the executive.

Duterte lost his balance and almost fell when people started pushing each other to get a selfie with him, Driz said. The Davao mayor had been without rest for 21 hours by then but wanted to accommodate well-wishers just the same, she added.

Among the changes to be implemented starting Wednesday was the use of a strict screening process, with only those with verified appointments allowed in, Driz said.

“We will limit the number of persons he will be meeting at a time. We hope our people would understand this,” she said.

Driz added: “I know that Mayor Duterte does not want so many people securing him but we have to do our job. The situation is different now than when he was just  our mayor.”

On Monday, Duterte complained that he now had too many security, including those from the Presidential Security Group (PSG). He did not want it, he said, describing the increase in security detail as “OA (overacting).”

Even his daughter, Inday Sara, was alarmed at seeing so many security officials outside her home and asked them to leave, Duterte said.  “Our life is just simple,” he added.

“[But] the situation now is much different. He is our incoming President and we don’t want something bad to happen to him. We must protect him well,” Driz  said.

For a start, Driz said the police had set up a gate at the entrance of Matina Enclaves, where people will be screened. Only those with confirmed appointments will be allowed in, she added.

Cars and other vehicles, “except those belonging to the mayor and his staff, and those of other dignitaries “will also be prohibited from coming in, the police spokesperson said, adding that the new protocol was meant to avoid the chaos of previous days and to impose order in the community that Duterte calls home.

Journalists covering Duterte will also be placed in a holding area fitted with electric fans, where they will be served food and drinks, and provided portalets. They will be allowed inside Duterte’s interim office only during press conferences.

Members of the media were also expected to submit themselves for a thorough screening, with their gadgets examined by the security staff, Driz said.

“We hope our media friends will understand us. We owe it to the people to protect (the incoming President),” she added.

Aside from the Matina Enclaves, the entire city will also be under tighter security, the police official said, adding that the city police had deployed about 2,000 uniformed personnel in  strategic areas. Allan Nawal, Inquirer Mindanao