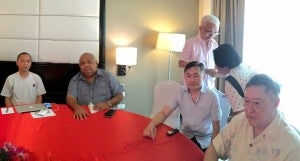 DAVAO CITY– Carlos “Sonny” Dominguez had a change of heart.

Lawyer Salvador Panelo, the appointed press secretary of presumptive President Rodrigo Duterte, recanted his earlier announcement that Dominguez had declined the offer as secretary of the Department of Finance.

“Earlier, I announced Dominguez declined the offer for secretary of finance. Apparently he had a change of heart. He accepted it,” Panelo told reporters Wednesday night.

Dominguez, a known major player in the business community, helped in the crafting of the eight-point economic agenda of Duterte and is part of his transition team. Panelo said Dominguez earlier declined the offer because of his previous business commitments.

The Davao businessman, who was finance head during Duterte’s campaign, had served in the Cabinet of former Presidents Corazon C. Aquino and Fidel V. Ramos.

“For me, the most important qualification in my job is having the ear of the president. That’s why I’m happy—I’m not trying to push [Dominguez] because he’s not confirmed but if it is he, then the three things that I look for a Finance secretary—ear of the president is the most important, knowledge of how government works, and knowledge of how business works—he has all three. So we’re happy he’s very qualified.”