Salceda joins beeline to Duterte camp, says Poe told him to do so 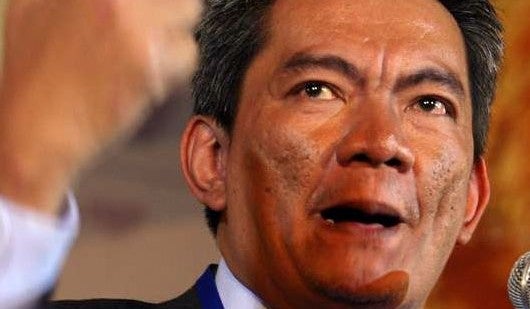 MANILA — Incoming Albay Rep. Joey Salceda has defected to the camp of presumptive President-elect Rodrigo Duterte but said his support for the country’s new chief executive was a directive from Senator Grace Poe whom he supported in the last elections.

The outgoing Albay governor likewise supported Duterte in his decision to offer Cabinet posts to the Communist Party of the Philippines.

The former transportation secretary was picked by Duterte and his political party PDP Laban for the House speakership.

Former first lady Imelda Marcos who was reelected to represent the second district of Ilocos Norte was also seen at the meeting of about 62 incoming members of the lower House.

Asked why he decided to support Duterte now, Salceda said: “That is the order of Grace Poe: support the new president.”

Salceda has jumped from one ship to another in the last three months. A former Liberal Party stalwart, he withdrew his support from former Interior Secretary Mar Roxas for Grace Poe in the presidential race.

Salceda, outgoing Albay governor, is being eyed by Duterte to be the chief of National Economic and Development Authority.

Although no formal announcement has been made, Salceda said he would accept if there was such an offer.

Salceda, an economist, meanwhile saw nothing wrong with giving Cabinet posts to the CPP, saying some countries have proven the arrangement could work.

“Look at Colombia. They managed to do it. Peru had done it too,” Salceda said.

Salceda was referring to the agreements reached by the Colombian government and the Farc rebel group.

For the Albay governor, the incoming Duterte administration should abandon the neoliberal policies which left-wing groups have questioned.

“We really have to question neoliberalism within the globalization framework. It is being questioned anyway by mainstream economists,” Salceda said.

Neoliberalism, a set of policies which involve the transfer of control from public to the private sector, has been blamed for the greater concentration of wealth and inequality across the world.  SFM