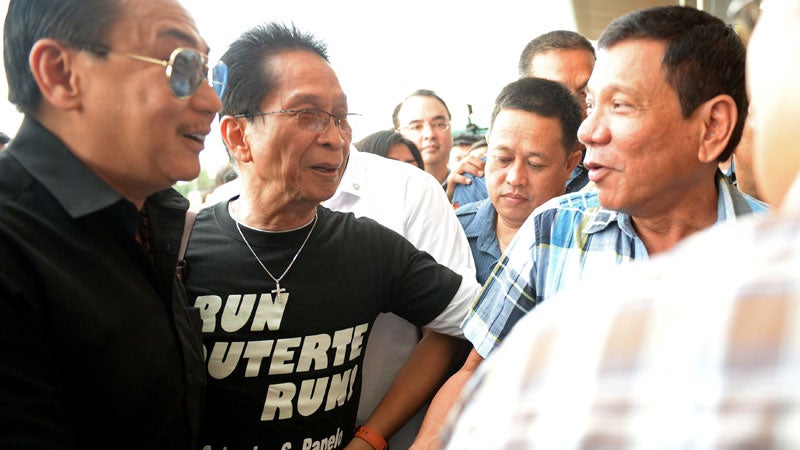 ACTOR-POLITICIAN MEETS RODY Actor-turned-politician ER Ejercito (left), who lost the gubernatorial election in Laguna province, is among the hundreds of people who met with presumptive President-elect Rodrigo Duterte in Davao City. AFP

Well-wishers, job  applicants and hangers-on hoping to take a selfie with  Rodrigo Duterte have come in droves to this city for the time-honored Filipino political ritual of jumping on the bandwagon of the big winners in last week’s elections.

Despite the hectic visitor arrival, there are enough rooms for them, according to Robert Alabado III, the Department of Tourism’s (DOT) director for Southern  Mindanao.

The city has at least 8,000 rooms that range from five-star accommodations to backpackers’ hostels.

Josef Ledesma, marketing and communication officer of Marco Polo Davao,  said the hotel currently had a 92-percent occupancy that they expect to continue “as long as Duterte keeps holding meetings here.”

The mayor has refused to travel to Manila, the nation’s capital some 1,000 kilometers away, forcing VIPs to head down south to this city instead.

“We are expecting more tourist arrivals especially since the city’s No. 1 promoter  is the incoming President,” Alabado said.

“Duterte has run his campaign with Davao City as Exhibit A,” he added.

“This will greatly provide income for the locals,” Alabado said, adding that the DOT was now preparing a “Duterte tour package” that “will tell the mayor’s story and how he has governed (Davao).”

Movie star-turned-politician ER Ejercito was among Duterte’s suitors, shifting effortlessly from his campaign support for Vice President Jejomar Binay, an early front-runner in presidential surveys, who finished a distant fourth out of five candidates.

“My loyalty to my party ends where my loyalty to my country begins,” said the former governor of Laguna province who said he hoped to be appointed to head a national tourism agency.

“I have to move forward. I cannot live in darkness. With my experience in local government and tourism, I can help the incoming administration,” said Ejercito, who waited nine hours before securing a 40-minute meeting with Duterte that began just after midnight on Tuesday.  But he emerged without a firm commitment.

Others were more lucky, including veteran politician Emmanuel Piñol, who was named agriculture secretary in the new administration.

“I’m at a loss for words,”  said the former North Cotabato governor and longtime friend of the Davao mayor.

Duterte’s aides have said the presumptive President-elect was looking to fill top posts with people who had proved their loyalty to him in the past and whom he could trust.

Until his stunning surge in the surveys, Duterte was regarded as a hell-raising outsider without the national machinery to win the presidency.

Outgoing President Aquino had branded him a dictator, while human rights groups have accused him of running vigilante death squads in Davao that killed more than 1,000 suspected criminals, charges he has variously accepted and denied.

Duterte’s powerful win has given him new allies, among them former Sen. Manny Villar, the head of the Nacionalista Party who was in Davao to sign an alliance with Duterte’s party, the PDP-Laban.

Also seen in Davao since the election were billionaire Lucio Tan and Ghadzali Jaafar, a senior leader of the Moro Islamic Liberation Front that has waged a decades-long separatist rebellion.

National boxing champion Manny Pacquiao, a Binay supporter who won a seat in the Senate, also planned to visit Duterte, an aide said.

Switching allegiances is endemic in the country, where politicians are often driven by self-interest rather than ideology, according to political analyst Richard Javad Heydarian.

“The Constitution is extremely lax on the ability of candidates to switch parties at a snap of a finger,” said Heydarian, an assistant professor of political science at De La Salle University.

Duterte’s win has given Mindanao a more positive image from the usual headline-making spate of violence related to Moro and communist insurgencies, or kidnappings-for-ransom by Islamic militants.

Duterte, who will become the first President from southern Philippines, had pledged during his campaign to spread economic development outside of “imperial Manila.” Reports from Karlos Manlupig, Inquirer Mindanao, and AFP