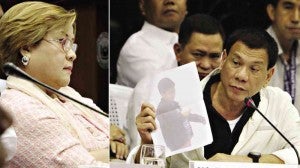 A nemesis of presumptive President-elect Rodrigo Duterte, De Lima, however, softened her stance in Duterte’s presidency, saying she would “watch him first.”

“I do believe that that is not the solution. The solution is to fix the justice system. The new executive should start with the strict and faithful enforcement of laws,” De Lima told reporters when asked about the issue of death penalty on the sideline of the book launch of former Immigration commissioner Siegfred Mison on Monday.

In his first public appearance since the May 9 elections, Duterte announced he wanted criminals committing heinous crimes including robbery and rape to suffer morbid death like a public hanging.

De Lima, former chief of the Commission on Human Rights, said the government, with the help of Congress, should fix the justice system, instead of jumping into a death penalty legislation.

She said that even if reviving death penalty was a popular move, the issue would undergo thorough and heated debates in the Congress.

De Lima is at the 12th place in partial and unofficial quick count of votes for the Senate by the poll watchdog Parish Pastoral Council for Responsible Voting (PPCRV).

Asked where she will stand under a Duterte presidency, “Let us observe the new leadership first. Let’s see and find out what his domestic and foreign policies. Let’s see. I just hope that he would always at all times uphold the Constitution, the rule of law and human rights.”

De Lima and Duterte prior and during the campaign period traded barbs. Duterte at one occasion called her bugoksi (stupid) for linking him to extrajudicial killings in Davao.

The erstwhile Davao mayor, who is known for his off-color language and cussing repeatedly, implied his links to the vigilante group Davao Death Squad.

De Lima in previous interviews warned the public about a Duterte presidency, calling him a monster.

“We have to observe and be vigilant. As far as I know, a sitting president has immunity from suits. But there is no such thing as immunity from investigation,” De Lima said. SFM