Trillanes to give Duterte ‘all the latitude’ to meet promises 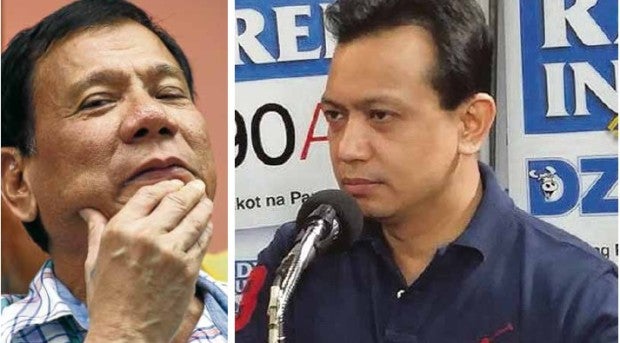 Saying he does not want to be a “party pooper,” Senator Antonio Trillanes IV on Monday vowed to give presumptive President-elect Rodrigo Duterte “all the latitude” he needs to fulfill his promises, especially his promise to make a corruption- and crime-free country within his first six months in office.

Trillanes said he already did his part when he exposed earlier that Duterte allegedly had at least P2.5 billion in various bank accounts, which the latter repeatedly denied.

“I did my thing, I went to BPI (Bank of the Philippine Islands) Julia Vargas, I stand by my challenge na sabi ko nga kung mali ako magre-resign ako (that I said I would resign if my claims were not true). He didn’t show up, ang nag-show up yung abogado nya, sinabi nila ilalabas nila (his lawyer showed up and their camp said that the transaction history of the accounts will be released) after a week so I’m still waiting,” he said when asked during a press conference in his office at the Senate if he would still pursue his allegations against Duterte.

“Nailabas na ba sa inyo yung transaction history ng accounts? Nasa sa media na yan if you will pursue it because I did my part. Ayoko naman maging party pooper kasi everybody’s celebrating, may euphoric mood ngayon at may initiatives also to unite the country under the newly-elected president so it’s up to you, media kung ipu-pursue nyo,” the senator added.

Trillanes earlier challenged Duterte to meet him at the BPI branch on Julia Vargas in Pasig City to open the latter’s bank accounts. However, the latter only sent his lawyer Salvador Panelo.

Trillanes had also asked Duterte to release the transaction history of his bank accounts, however, the latter only came up with a bank certification showing that he only had about a P27,000 balance at his BPI account.

Asked again if he had gotten back to BPI to follow up on the transaction history of Duterte’s bank account, the senator reiterated his promise that he would not be an “obstructionist.”

(But did I forget all these issues? I should not be the only one who should not forget these issues, but all of us, the media especially because the allegation is there, it is not disputed.)