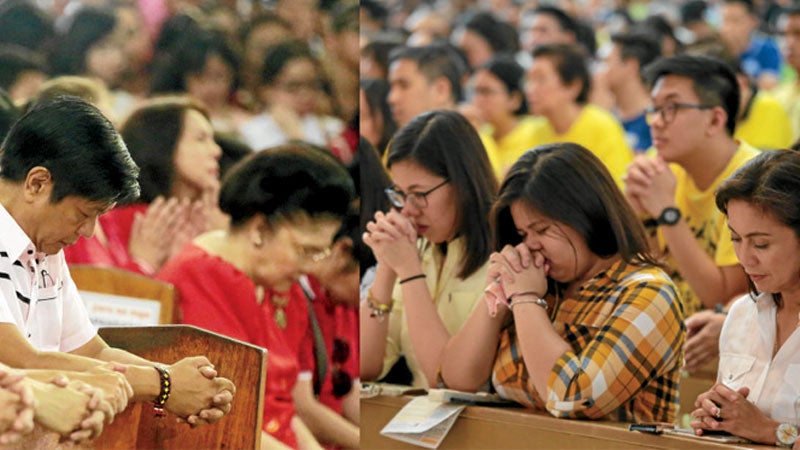 Marcos went to the National Shrine of Our Mother of Perpetual Help in Baclaran, Parañaque, and Robredo to the Church of the Gesu on the campus of Ateneo de Manila University in Quezon City.

The 12:30 p.m. Mass at Baclaran Church was offered for “katotohanan at integridad ng halalan (truth and the integrity of the elections),” said the invitation of Marcos’ campaign organizers.

But Marcos, along with eldest son Sandro and wife Louise, gave no indication that it was more than an ordinary Sunday Mass.

It was learned that the Marcoses, particularly the matriarch Imelda, frequently heard Mass at Baclaran.

As soon as Bongbong and his family got off their car, churchgoers started crowding and clicking away on their mobile phones, taking pictures of the Marcoses.

Even inside the church, people started chanting “Marcos,” and “BBM,” and had to be asked to stay quiet for the service celebrated by Fr. Ben Sy.

At the part of the Mass where churchgoers had to wish each other peace, Marcos rose from his seat and flashed  peace signs in greeting other churchgoers before approaching his mother who was seated on a pew across from his.

Sandro and Louise embraced the former first lady before returning to their seats next to the senator.

Churchgoers, who apparently support Marcos’ vice presidential bid, waited for the communion and took the opportunity to take pictures of the family.

The service wasn’t even over when people started crowding near the Marcoses’ pews. The crowd had to be held back by security personnel so the Marcoses could leave the church and board their vehicles.

A few hours after Marcos heard Mass in Baclaran, Robredo did the same at Ateneo’s Church of the Gesu at past 3 p.m.

The 51-year-old Robredo was accompanied by her daughters Aika, Tricia and Jillian, who each had a role in the Mass officiated by her spiritual adviser Fr. Manoling Francisco.

The Jesuit priest gave a nonpolitical homily and did not mention Robredo, focusing his talk on the “language of love” that empowers Christians to spread God’s message.

Robredo is leading Marcos in partial and unofficial tallies by more than 200,000 votes but Marcos’ camp has raised doubts about the integrity of the results, including the introduction of unauthorized script on the transparency server.