Leftists switch from Poe to Duterte 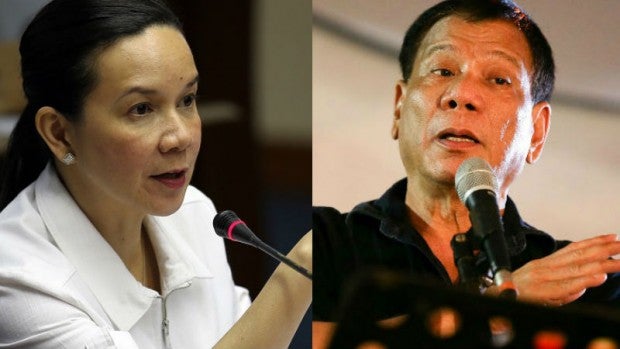 The bloc of 11 progressive parties on Sunday announced its support for the election winner, calling his landslide victory a repudiation of the “elitist” administration of President Aquino.

“We recognize such victory as an expression of popular outrage over and rejection of the regime of ‘daang matuwid’  and a cry for sweeping change in the elitist and anti-people system,” Makabayan said.

“We are encouraged by his pro-people and pro-poor policy pronouncements on a number of issues,” they said, citing Duterte’s call for the immediate resumption of peace talks with the National Democratic Front and the release of political prisoners.

The activist groups also lauded Duterte for his vow to put an end to labor contractualization, or the practice of keeping employees on short-term contracts to avoid having to pay the right wages and benefits, as well as to increase government support for farmers.

Makabayan pledged its support for Duterte’s programs prioritizing education, health, food aid and other essential services over big infrastructure projects “in the light of the mass poverty and hunger.”

The statement was signed by Makabayan president Satur Ocampo, and cochairs Liza Maza and Rafael Mariano, all prominent activists in the leftist movement.

The statement of support from the Makabayan bloc came  as the camp of Duterte moved to organize a ruling coalition in Congress in order to ensure support for the incoming president’s priorities and to thwart any attempts to impeach him.

The rival Liberal Party, which claims 110 members in the House, said it was premature of PDP-Laban to expect mass defections to Duterte’s party.

and whether or not a Duterte ally clinches the powerful position of House Speaker.

The Makabayan bloc’s rally behind Duterte did not come without some snickering from the camp of Duterte.

Duterte’s spokesperson Peter Laviña fired a shot at the left for criticizing Duterte’s economic agenda and for “mouthing their usual criticism of others but not  undertaking their own criticism, self-criticism.”

Laviña later told the Inquirer that his post was personal, and not  the stand of the presumptive president-elect.

Laviña was apparently still sore that the Makabayan bloc had supported Poe in the elections: “In their desire to push one of their national officials to be senator,  they rush to a hasty decision… Having made these mistakes, they  want to continue with their old ways of critiquing, critiquing, critiquing.  I am truly sorry for these leftist groups which will be left out in the  march of history with their dogma and belligerent styles and methods of  work.”

He advised the leftists to “dialogue with the incoming  government instead of mounting black propaganda.”

The Netherlands-based communist leader, who was once Duterte’s university teacher in  Manila, commented that militant group Bayan was not engaging in black  propaganda when it criticized the proposed economic  agenda.

“Bayan has its own political and organizational integrity and independence  and has the democratic right to express itself publicly on any matter that  is public like the eight-point economic agenda announced by  Mr. (Carlos) Dominguez. I do not think that Bayan is engaged in black propaganda. It  has made critical remarks but it also makes constructive proposals,”  Sison told the Inquirer.

He said  the National Democratic Front of the Philippines  is committed to  dialogue with the Duterte government. “Negotiations are needed precisely to  discuss and work out the agreements on the economic, social and political  reforms needed for the benefit of the people,” Sison said.

Earlier, Bayan secretary general Renato Reyes said in a statement that the  proposed economic roadmap of the Duterte camp would worsen the conditions  of ordinary people, most especially in the marginalized sectors.

To pursue economic sovereignty and strengthen the domestic economy, he said,  Duterte should “abandon all plans for economic Charter change and instead  review the business terms of big foreign mining companies, coal plants,  large plantations and other enterprises that plunder the national patrimony  and destroy the environment.”