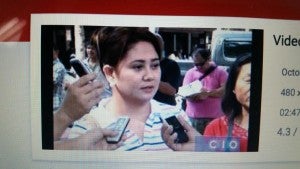 January Duterte (Screengrab of a 2013 photo appearing at www.vidinfo.org)

DAVAO CITY – Just days after the elections, the daughter-in-law of presumptive President-elect and incumbent Davao City Mayor Rodrigo Duterte broke her silence and vowed to press charges against a man who accused her and her husband of  being involved in smuggling.

January Duterte, the wife of Davao City Vice Mayor Paolo Duterte, said they have been consulting lawyers in preparation for the filing of a case against Perfecto Tagalog of the Coalition of Filipino Consumers.

Earlier this year, Tagalog held a press conference and accused the vice mayor, former National Food Authority (NFA) administrator Lito Banayo, and  Davidson Bangayan, also known as David Tan, of smuggling rice and other products at the Davao Port along with the presumptive President-elect.

Tagalog reportedly said that January and Paolo were engaged not only in rice smuggling but in other commodities like ukay-ukay and electronics, as well.

“In the remaining days of the campaign, there had been a barrage of accusations against my husband and I. We have remained silent for we knew that those were meant to discredit our family given that my father-in-law, Mayor Rody Duterte, led the presidential surveys at that time. But we, as a family, were hurting and suffering in silence because of the accusations,” January said in a statement.

January is currently a barangay (village) chair and the president of the Association of Barangay Councils in Davao City, earning her a seat at the city council.

“Mr. Perfecto Tagalog accused me of being a smuggler of ukay-ukay or used clothing and other articles. I was shocked as I was never into any business involving sale or importation of goods whatsoever. This accusation spread like fire in our community that my daughter and my husband were in anguish and in distress upon knowing it,” she said.

With the election campaign over, January said the time has come for her to seek justice for her family.

“We have decided to take action against Mr. Tagalog and all those who were in conspiracy with him. In recent days, we have been constantly working with our lawyers to prepare cases which we may possibly file against him and his co-conspirators. I will seek justice for my family,” she said.  SFM/rga