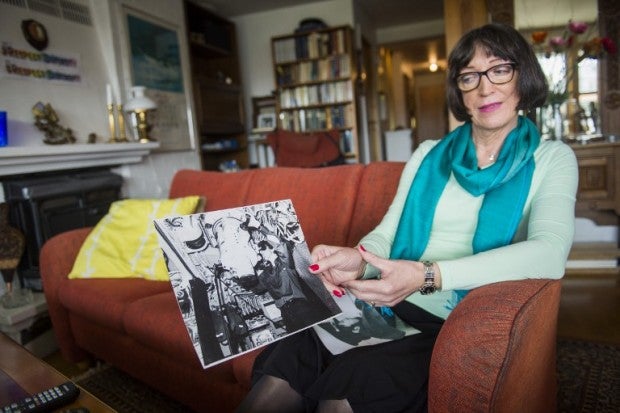 John Jeanette Solstad Remo shows a picture of herself as she worked as a submarine captain at her home in Oslo, on April 20, 2016. AFP PHOTO / Fredrik Varfjell

OSLO, Norway — As the commander of a Cold War submarine tracking the Soviets, John Jeanette’s dresses were stashed away in a locker reserved for top-secret documents.

Soon, this former Norwegian navy captain will be recognized for what she is: a woman born in a man’s body.

Under a proposed new bill hailed by activists as one of the most liberal in the world, people who want to change gender in Norway would no longer be required to undergo any physical transformation.

No more humiliating psychiatric exams, no lengthy hormone treatments and invasive surgeries resulting in irreversible sterilizations that have been the practice for a legal gender change in Norway since the 1970s.

All you would have to do is notify authorities — a click on a website would suffice — to change your legal gender if the bill becomes law.

The legislation, which activists hope will be voted on by parliament before the summer break, has met little opposition.

“All my life, I had to show that I was a boy, then a man. I played the role of macho. I had a nice thick beard, exactly as was expected,” says John Jeanette Solstad Remo, who picked a first name emphasizing her trans identity.

“But when I look like a man, even though I can function, life is grey. When I look like a woman, it’s the opposite, there are lots of colors in my head and around me,” adds the 67-year-old ex-submarine captain.

“No one other than me can decide who I am and this law recognizes this right.”

Dressed in a black skirt and a pale green top and matching scarf, her brown bob framing her face, Remo recalls a lifetime of uphill battles.

Her memories range from the joy of wearing girls’ clothes at the age of four and being immediately stifled by her mother, to suicidal thoughts in her teens after being outed by other youths.

She also remembers trying to fit in while hiding her true self in the virile world of the naval academy and the submarine corps.

“When we called at port, we often stayed in hotels. I would buy a bottle of wine, I’d watch TV and I stayed in my room, dressed as a woman. It was the only way to survive,” says Remo, who has not undergone gender reassignment surgery.

Her first marriage ended after her unwitting wife found a bag of women’s clothes hidden in the cellar. Remo remarried, this time to a woman who accepted her as she was: “The trans that I am is sort of a third person in our relationship.”

While times have changed in Norway, and public opinion too, daily life can still be problematic when it comes to borrowing a book at the library, getting a prescription filled, or crossing borders with identification papers that don’t match one’s physical appearance.

Still listed as a personality disorder by the World Health Organization, transgenderism stirs up emotions internationally.

A North Carolina law that requires transgender people to use the restroom corresponding to the sex on their birth certificates has sparked angry protests, from Bruce Springsteen to Deutsche Bank, and a heated debate between US Republican presidential candidates Donald Trump and Ted Cruz.

Argentina is a pioneer in the field, having allowed people since 2012 to choose their own legal gender without previously having reassignment surgery.

But life expectancy for the Latin American country’s transgenders is no more than 35 years, according to a study by the Association of Transvestites, Transsexuals and Transgenders of Argentina.

It said they were often ostracized by society, facing discrimination and a lack of access to jobs and housing for example, that left them increasingly desperate.

“The law is one thing but you also have to really change attitudes,” says Patricia Kaatee of Amnesty International, which fights for the rights of transgender people.

Norway’s bill also allows minors aged six to 16 to change their gender if both parents agree. If one parent opposes, authorities may decide “in the child’s best interest.”

“The law will make things easier for us. We won’t have to always prepare everything in advance before going anywhere. There are already so many things to explain,” says Sofie Brune, a mother of two who lives in Oslo.

Her second child Miria was born six years ago in a girl’s body but has identified as a boy since a very young age. So it’s only natural that he now plays on the local boy’s football team, and he’s treated as a boy in school.

“He’s happy. That’s what’s most important. Children around him are very tolerant once we explain” the situation, Sofie says.

For transgender people, the most important thing is to be able to live their lives the way they want. In the words of transgender Frida Haslund: “I don’t want to be buried without ever having been myself.”