Dugong on the verge of extinction 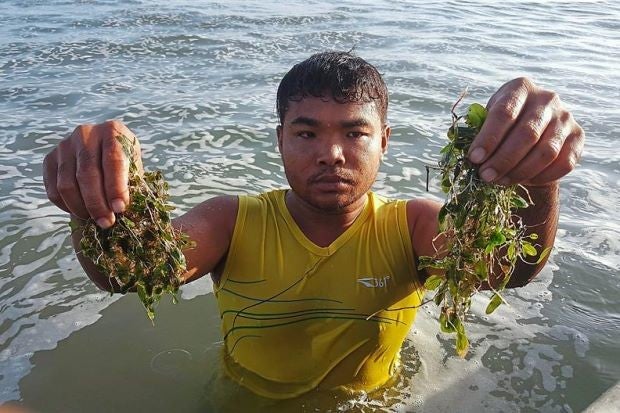 Main diet: Rolen showing the type of seagrass usually consumed by dugong near his village in Gelang Patah. THE STAR ONLINE/ASIA NEWS NETWORK

GELANG PATA, Malaysia — Known also as the sea cow, the dugong which inspires many tales like mermaid legends is on the verge of extinction.

The vast development taking place in south Johor, once a popular feeding ground for the mammal, has led to its dwindling numbers.

Back in the 1960s and 1970s, local fishermen would often catch a glimpse of the shy creatures as the area was abundant with spoon seagrass, their main diet.

“We convinced the fisherman to release the dugong back into the sea as it was still a baby. Its mother was roaming near the shore, as if waiting for her baby,” he said in an interview.

Tang claimed it was a common practice in the old days for the orang asli community, an ethnic group in Malaysia, to consume dugong meat, which tastes like beef.

“Orang asli would also carve the bones into a pipe,” he said, attributing this to a belief that smoking it would help reduce body temperature when a person was suffering from high fever.

There was also talk then that the tear drop of a dugong was believed to have magical powers, so bomoh (Malaysian shamans) would use it to make love potions, he claimed.

Tang, who has been living in the village since marrying his orang asli wife in the 1960s, claimed there were about 200 to 300 dugong five decades ago but their number had decreased by more than half.

“Besides dugong, it was common to spot crocodiles, turtles and bottlenose dolphins in the waters of Gelang Patah, especially near Pulau Merambong which is rich with seagrass.

“The seagrass is a favorite breeding ground for prawns, crabs and seahorses as the marine creatures can camouflage themselves on the seabed or hide from their predators there,” he said.

He believes that the number of sea creatures had dipped due to land reclamation works.

Another fisherman Rolen Oni, 35, said he first saw a dugong, almost 5 meters long, when he was about 16 years old.

“Three adult dugong had died in the past due to injuries from ship propellers near the port area.

“Some people have even offered financial rewards to fishermen in the village if they manage to catch a dugong alive,” he claimed.

Kampung Pendas Laut fishermen head Azman Adan, 45, said the 3 km sandbar from Tanjung Kupang to Tanjung Adang was the dugong’s favorite playground before the development of a seaport within the area.

“It was once common for fishermen to spot dugong grazing on the seabed during low tide but now it has become a rare sighting,” said Azman, who has been going to sea since he was 13 years old.

The most recent spotting of a dugong was on May 5 when the carcass of one was found floating in the sea near the village after it had apparently sustained injuries from fishing nets.