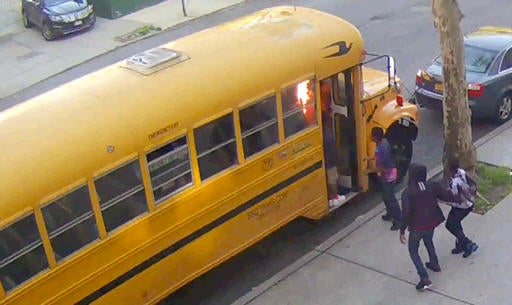 In this frame grab taken from surveillance video, children watch as pieces of cardboard they placed on a school bus begin to burn, Sunday, May 8, 2016, in the Crown Heights section of the Brooklyn borough of New York. AP

NEW YORK—Twenty-five years after violent race riots in Brooklyn’s Crown Heights neighborhood, a new incident — the torching a school bus outside a Jewish school — has raised questions about whether tensions are starting to fray again.

Police have arrested five black boys in this week’s blaze.

Tensions between blacks and Jews in the neighborhood were thought to have largely eased since 1991, when the neighborhood’s black residents exploded into days of rioting after a 7-year-old boy was accidentally struck and killed by a car in the motorcade of the leader of the Lubavitcher sect.

A rabbinical student was stabbed and died. TVJ