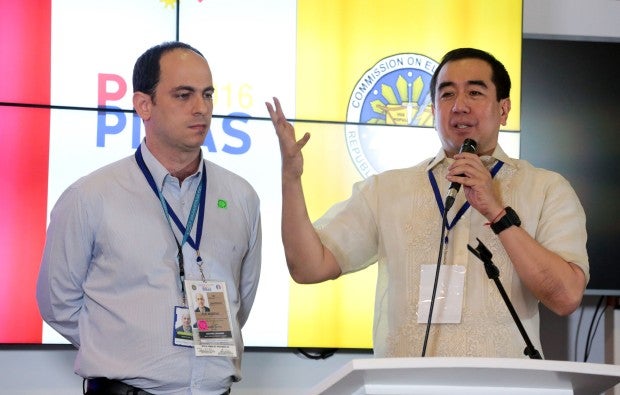 Comelec chairman Andres Bautista and Smartmatic General Manager Elie Moreno answers questions from reporters during a press briefing at the Comelec headquarters in PICC on Thursday, May 12, 2016. GRIG C. MONTEGRANDE

Allies of Sen. Ferdinand Marcos Jr. on Friday presented a self-styled “IT expert” who called on the Commission on Elections (Comelec) and its technology partner Smartmatic to open their computer systems to a “public audit,” as the senator’s camp continued to question the results of the quick count of the votes in the vice presidential election.

Glenn Chong, a former Biliran representative and spokesperson of an election watchdog, said it was not enough for Smartmatic to explain the new script or computer command it introduced during the transmission of votes on Monday evening.

Chong said the Comelec and Smartmatic had to show the log of all the scripts or commands that were inserted into their systems, adding the audit could be done without stopping the quick count or stalling the coming congressional canvassing.

“Our demand is that the Comelec must open the system and the platform to investigation,” said Chong, who was introduced as “one of our IT experts” at a news conference in Marcos’ Mandaluyong campaign headquarters.

The lawyer and certified public accountant who said he had some units in statistics and had been dabbling in computer programming since high school, presented his analysis of the “seemingly impossible” way that Marcos’ lead steadily went down while Camarines Sur Rep. Leni Robredo steadily gained after the new script was injected into the transparency server on Monday night.

“What we are establishing is probable cause and justification for a system audit,” Chong said.

“Just showing the original script and new script is not acceptable,” he went on, arguing “there was no overriding necessity to change the question mark to ñ.”

“Anything under the sun can be done when you change the script. You can change the question mark to ñ, or you can make a vote of 1 become 1,000,” he added.

Asked whether he believed that new script would change the official count, Chong replied: “It remains to be seen. We will not find out now, [as] it will take some time since the national board of canvassing has not started.”

“We cannot allow this question to remain hanging since it affects the integrity of the elections,” he said.

But while he raised doubts about the count of the vice presidential votes, Chong said he was “convinced” the results of the presidential election, which gave Davao City Mayor Rodrigo Duterte an insurmountable lead over his four rivals, were not tampered with.

Asked why he thought the cheating was done only in the vice presidential race, Chong replied: “Maybe the Comelec and Smartmatic are afraid only of Mayor Duterte.”

Chong admitted he did not check whether the results of the senatorial race were accurate.

He said the public audit should cover not only the main computer servers but also the redundancy or backup servers, as the questioned script could have been injected from there.

Claiming he was cheated in his bid for reelection in the first automated elections in 2010, Chong said he offered to give his “personal and professional opinion” to bolster Marcos’ argument but that he was not part of Marcos’ team.

“No, I was just requested to come over,” he said.

He also said he had not written the Comelec to ask for an audit, explaining that he had given up requesting anything from the Comelec because “they will never answer.”

Chong said he used to be a spokesperson for the Reform Philippines Coalition. He said he was still with the group and with AES Watch. “I think we will” ask for an audit, he said.