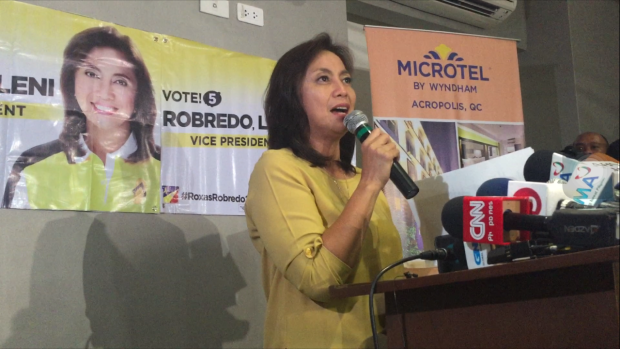 The camp of Liberal Party candidate Camarines Sur Rep. Ma. Leonor “Leni” Robredo parried doubts of her supporters who are nervous about the final result of the vice presidential race, saying the electoral fraud allegations will remain speculations from the team of her closest rival Senator Ferdinand “Bongbong” Marcos Jr.

Robredo’s spokesperson Georgina Hernandez on Friday asked the supporters to trust election experts, including the foreign observers who concluded that no cheating happened in the May 9 national elections.

(Whether there are doubts or none, the numbers in the elections won’t change. May we all believe and trust in the democratic exercise the country is undergoing.)

Robredo continues to lead the race with 225,266 votes ahead of Marcos.

Hernandez also reiterated what Commission on Elections (Comelec) Commissioner Rowena Guanzon said that change in the hash codes did not affect the result of the unofficial vote count provided real-time by the poll body and Parish Pastoral Council for Responsible Voting (PPCRV).

(Although there were changes, Commissioner Guanzon said that the result of the unofficial vote count won’t be affected.)

She said Robredo’s team will keep on explaining to the people that the issues on the transparency servers will not have an effect on the final result. RAM

Read Next
Comelec tells Smartmatic: Secure consent before making any action
EDITORS' PICK
Biden vows to stand with Asia on freedom, hits at China on Taiwan
FDA reviewing COVID-19 vaccines’ EUA for booster shots
Climate Change Commission and Nestlé PH to discover sustainability-focused solutions
What’s at stake for every fighter at ONE: NextGen
Legarda emphasizes role of ICC/IPs in nation building this IP month
NCR’s COVID-9 alert level may be downgraded from 3 to 2 soon — DOH
MOST READ
Drivers now required to take driver’s education upon license renewal – LTO
Gordon to Duterte: You? Teaching me courtesy?
Marcos Jr’s ‘special diploma’ from Oxford: You can have it, too
Can Marcos Jr. be disqualified?
Don't miss out on the latest news and information.