IT expert to Comelec: Open system to dismiss doubts 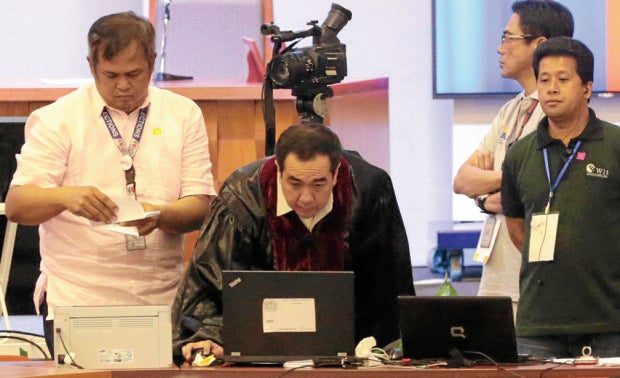 CANVASSING AT PICC Comelec Chair Andres Bautista enters his computer passcode for the
canvassing of votes for the senatorial and party-list elections at the Philippine International Convention
Center in Pasay City. GRIG C. MONTEGRANDE/INQUIRER FILE PHOTO

Information technology expert and lawyer Glenn Chong on Friday called on the Commission on Elections (Comelec) to open its systems and platforms to the public in order to dismiss doubts on supposed rigging of votes in the May 9 national elections.

“The Comelec must open the system and the platform to investigation. Pwede mag allocate ng limang tao, independent IT experts, meron din Comelec and from Smartmatic (Five people could be allocated, who would be composed of independent IT experts, IT personnel from Comelec and Smartmatic), the media should be there para mapakita natin kasi hindi sapat ang original script at new script lamang (so we can show the public because original script and new script are not sufficient),” he told reporters in a press briefing at the headquarters of vice presidential candidate Sen. Ferdinand “Bongbong” Marcos Jr.

Chong claims he works independently but was asked by the Marcos team to come over because of his similar experience in 2010 when he ran for congressman in Biliran.

(I recall my personal experience in 2010. What happened to Sen. Marcos also happened to me in the evening. Around the same time, I was overtaken and at the statistical data we found out that 17 precincts were delayed until morning.)

“That’s why I have a personal attachment to this cause,” he added.

At the briefing, Chong also explained through a presentation the decline of Marcos’ lead over his closest rival Camarines Sur Rep. Ma. Leonor “Leni” Robredo after the new script was added to the Comelec server.

On Thursday, the Comelec confirmed that there was a change in the script to correct a character “ñ”  in the names of some candidates. It clarified that it won’t affect the results.

The modification of the script happened on the night of May 9.

The camp of Marcos earlier alleged that a new script was introduced to the Comelec server which altered the hash codes used by the Comelec.

“Anything under the sun can be done when you change the script. Di gumagana ang computer kung hindi bibigyan ng instructions (The computer won’t function unless it’s given instructions),” Chong said.

“The question has to be resolved today. Dapat sagutin ang nangyari, pwede naman magpatuloy ang canvassing at magkakaroon pa rin ng system at platform audit (They should answer what happened while the canvassing continues along with the system and platform audit). Inadmit ng Comelec (The Comelec admitted it), the ball is in their court, there is a big question on the integrity of the elections. Marami na ang nagdududa sa ating mga kababayan (Many of our countrymen are expressing doubts over the issue). You can’t tell us to wait for another six years,” he added. RAM/rga