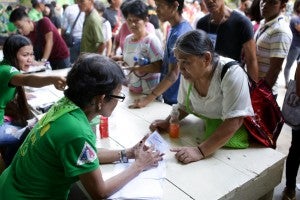 An officer attends to a question of one of the voters. Photo by Tristan Tamayo/INQUIRER.net

ILOILO CITY — The mayoral race in Anini-y town in Antique now hangs on one precinct, which will hold special elections on May 14.

The clustered precinct in Barangay Mabuyong with a total of 691 voters is among the areas that will hold special elections due to lack of ballots, according to Resolution 10129 issued by the Commission on Elections en banc on May 11.

Two hundred sixty-eight voters in the village failed to vote in the May 9 elections because of the shortage of ballots. The municipal board of canvassers has suspended the proclamation of winners of the mayoral race pending results of the special election.

These voters will determine who will be the next mayor of the town,  35 kilometers from the capital town of San Jose in Antique.

As of Thursday noon, Maxfil Policar (National Unity Party) is ahead by 65 votes with 3,501 votes, followed by Jobert Pahilga (Liberal Party), who has 3,436 and Jorrey Samplor (United Nationalist Alliance) with 2,113.

The special elections will determine whether Policar or Pahilga will be the next mayor.

Policar, incumbent municipal councilor, is a member of a political family which has ruled the town for decades. He is seeking to replace his elder brother, outgoing Mayor Reynaldo Policar.

Special elections will also be held in Barangay Insubuan in San Remigio town in Antique, due to lack of ballots.