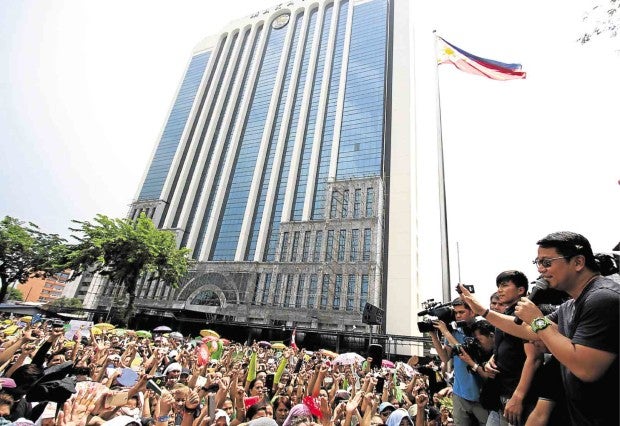 TURNING the mayor’s seat over to Abby Binay is the farthest thing from Kid Peña’s mind as he talks to his supporters in front of Makati City Hall on Thursday. RICHARD A. REYES

The camp of incumbent Makati Mayor Romulo “Kid” Peña Jr.—who lost to Rep. Mar-Len Abigail “Abby” Binay in his bid for the city’s top post—is set to file an appeal in the Commission on Elections (Comelec), alleging irregularities in the conduct of the local polls.

“We are still organizing ourselves. We are collating evidence… we are given 10 days [by the Comelec] so we still have seven days. We will talk about what we will file,” Peña told reporters as his supporters held a rally at the Makati City Hall quadrangle on Thursday.

A group of Makati teachers who served during the May 9 elections, on the other hand, vowed to file charges against protesters who accused them of shaving Peña’s votes.

Pressed about the evidence he had, Peña said he was still trying to sort these out although they had something to do with vote-buying, among other irregularities. There were also documents and a video showing that a vote-counting machine might have been tampered with, he added.

Although he did not say who were behind the supposed manipulations, several of his supporters in the rally who called for a recount of the votes were certain that it was Binay.

The congresswoman, who was proclaimed by the local Comelec as the winner in the mayoral race on Tuesday, is the sister of former Makati Mayor Junjun who was removed from office following corruption allegations, and one of the daughters of Vice President Jejomar Binay.

“I heard that some [school] principals were paid off. I hope that is not true,” one supporter who spoke onstage told the crowd. 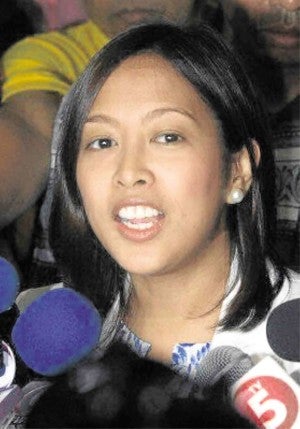 The protest which began past 9 a.m. was relatively peaceful, with almost a thousand people showing up at the quadrangle, carrying placards and wearing T-shirts with messages in support of Peña.

“Mas happy na kami (We’re happier now),” read one which also had Peña’s name on it. Another said: “Mayor Kid kapag lumaban ang api (when the oppressed fight back).”

Policemen deployed to the area formed a barricade in front of city hall to keep out possible troublemakers who might disrupt operations.

In a brief speech onstage, Peña reminded protesters to keep calm to avoid observations that they were sore losers.

“I know you believe and I know you know that I won. I won in your hearts…. I want to tell all of you that now, all [pieces of] evidence are being collated so we will know what will be the basis of our actions,” he said.

“If we don’t convince [the Comelec], then we will let it go, but we will look into everything [first],” he added.

“This is the first time that I hear of the opposition being accused of cheating. May I remind you, Mr. Peña, [you] are the one in office, not us,” he said.

Nevertheless, if Peña has any evidence, he should give these to “those concerned,” Salgado added.

“The period of gimmickry is over. The people of Makati have spoken. Let us move on, sir,” Salgado said.

Meanwhile, Riza Formilleza, officer in charge of the principal’s office at the Pembo Elementary School, said that a group of at least 50 teachers would 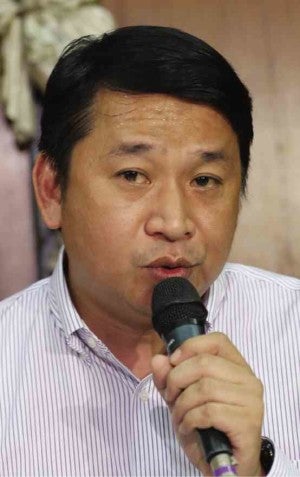 charge Peña supporters who barricaded the entrance of the campus on Tuesday night with libel, moral and oral defamation, cyberbullying, and violation of the Omnibus Election Code.

According to Formilleza, apart from the protesters, they would also sue those who had “vilified” them on social media.

“Our teachers do not have the capability to manipulate the [vote-counting machines]…. With all the bashing on Facebook, social media… this is traumatic for our companions, some of whom do not want to serve in the next elections,” she said during a meeting in the school’s audiovisual room.

“They didn’t even consider the fact that our families would be affected once they spread those lies on the Internet,” teacher Vidam Sultan added.

On Tuesday night, a group of Peña supporters barricaded the entrance of the campus to prevent the teachers from transmitting the election returns for canvassing to the city coliseum.

This was after they received reports that the Makati mayor had received zero votes in four polling precincts at the school.

According to Formilleza, the misinformation may have been passed on to the protesters by poll watchers who “did not see what really happened inside [the precincts].”

“[The information the protesters got] was all hearsay,” she said.

“We’re just doing our job. They are making this too personal, attacking the dignity of the teachers,” Formilleza told reporters.

“All we have to do is  file a collective complaint. We already have our materials and evidence and we will not waste any time doing this,” Analuz Cristal, the group’s lawyer, said. With John Cyril Yee, Angelica Cruz and Carizza Ibañez