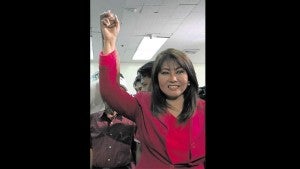 NAGA CITY—Singer Imelda Papin has vowed to block the proclamation of the patriarch of the Fuentebella political clan in the fourth congressional district race, saying her camp’s count showed she was leading by 1,300 votes.

Papin, a popular singer in the 1980s and the artist behind the hit “Isang Linggong Pag-Ibig” (Weeklong Love Affair), vowed to file a petition in the provincial board of canvassers (BOC) to block Fuentebella’s proclamation.

Her lawyer, Salvador Panelo, arrived at the canvassing venue here on Thursday afternoon, amid cheers from about a 100 supporters. Some 250 policemen were sent to the area to secure and control the crowd.

The canvassing for the remaining results from Tinambac town resumed on Thursday, but the BOC had yet to declare and proclaim the winning candidates.

“My running for Congress is historic because I was able to see the real situation in my district,” Papin said.

Papin, who hailed from the coastal village of Bitaogan in Presentacion town, first tried her luck in the congressional race in the fifth district in 2004 but she lost.

According to Ernie Verdadero, a former provincial board member, Papin entered politics in 1995 when Fuentebella tapped her to run against Luis Villafuerte, the patriarch of the Villafuerte clan, in the gubernatorial race. She lost that race.

In 1998, however, Villafuerte tapped Papin as his running mate. She won as vice governor and served for two terms up to 2004.

After her loss in the 2004 congressional race, Papin left Camarines Sur and stayed in Metro Manila, and later went to the United States. In 2013, she again ran for a seat in the congressional district in San Jose del Monte City in Bulacan but was disqualified for lack of residency, Verdadero said. Juan Escandor Jr., Inquirer Southern Luzon

NABUA, Camarines Sur—Heeding what the law he authored prescribes, Rep. Salvio Fortuno took his oath before a village chief here on Wednesday night.

Fortuno, who won the congressional in the province’s fifth district over Felix Alfelor Jr. in Monday’s elections, filed House Bill No. 2729, which was approved and signed into law as Republic Act No. 10755, authorizing a punong barangay (village chief) to administer the oath of office of elective officials.

Imelda Bolivar, chair of Barangay San Roque Poblacion, swore in the lawmaker in the presence of his wife and several local leaders.

In a ceremony held in his house here, Fortuno thanked his supporters and his relatives for his victory against Alfelor. He said he was inspired to file the bill when President Aquino failed to take his oath before a village chief when he won in 2010 because it was not authorized by law. 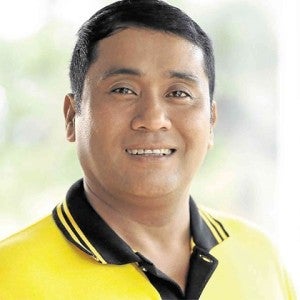 A REELECTIONIST mayor, who has been in detention in Ormoc City on rape and human trafficking charges, was proclaimed winner in Mataas na Kahoy town in Batangas province despite a Commission on Elections (Comelec) ruling that canceled his certificate of candidacy (COC).

The proclamation of Mayor Jay Manalo Ilagan, a Liberal Party member, proceeded early Tuesday even without the official’s presence, according to Eric Ebite, municipal election officer. Ilagan surrendered to authorities in Leyte province on Jan. 25.

The Comelec’s Second Division issued a resolution on April 25, disqualifying the mayor from running because he was a “fugitive from justice” at the time he filed his COC. His camp appealed the ruling to the Comelec en banc.

“That’s not final yet,” Ebite said, referring to Ilagan’s canceled COC. “There’s [no law] saying he could not be proclaimed [winner] because he was not present [during the proclmation].”

Ilagan won over two rivals. His wife, Janet, a vice mayoral candidate who ran his campaign, was likewise victorious against reelectionist Vice Mayor Henry Laqui and another candidate.

Councilor Lemuel Traya defeated his own mother, Ofelia, in the town’s mayoral race. He was declared winner after garnering 13,245 votes against Ofelia’s 10,497.

Lemuel, 36 and a first-term municipal councilor, will be working with his father, Octavio Jr., an outgoing mayor who ran unopposed for vice mayor. He said it was a hard decision to run against her mother who had been estranged from his father for more than 10 years.

Ofelia served the full three terms of mayor in the fifth-class municipality and stayed mostly in the United States after she and Octavio separated.