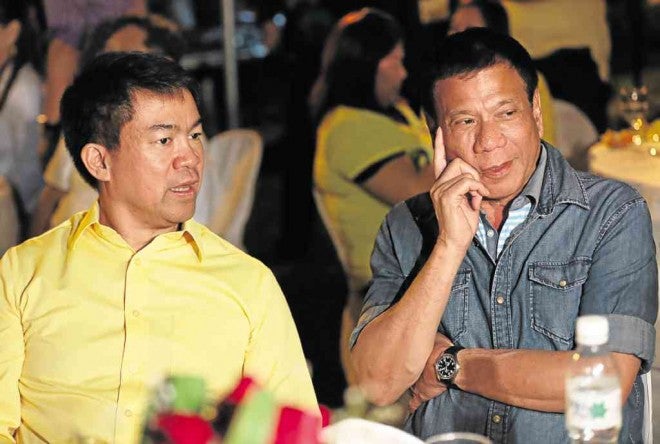 Will Senate President Franklin Drilon, vice chairman of the Liberal Party (LP), retain his post when the new Congress opens in July, or will he be replaced by an ally of presumptive President Rodrigo Duterte?

Neither Drilon nor Duterte’s partymate in PDP-Laban, Senator Aquilino “Koko” Pimentel III, was ready to predict whether or not a change in leadership in the Senate was imminent.

While he is more confident that the incoming administration could get the support of the majority in the House of Representatives, Pimentel could not say the same for the Senate.

(Those in the Lower House seem to be more excited because many of them have gone to Davao to visit the secretary general of PDP-Laban, Congressman Bebot Alvarez.)

Pimentel, president of PDP-Laban, was referring to newly-elected Davao del Norte Representative Pantaleon “Bebot” Alvarez, who was reportedly endorsed by the party to run for House speaker.

(In the Senate they are still relaxed; let’s wait for the proclamation since for their part, others still haven’t proclaimed, they don’t want to appear like eager beavers.

(In the House, I think the situation there is improving. In the Senate, like I said, we haven’t started yet, so at any rate, my comrades in the Senate know what’s best for the institution; this is a collective decision and we will see to it that the collective wisdom of the senators prevail.)

Drilon earlier explained that in the Senate, the incumbent leaders of the 16th Congress will continue to function “until the elections take place at the opening of Congress” in July.

A majority vote of the 24 senators is needed either for Drilon to keep his post or unseat him.

Drilon, Pangilinan, Recto and De Lima are LP members while Villanueva and Lacson are independents.

Sotto and  Gatchalian are members of the Nationalist People’s Coalition (NPC), which endorsed the  presidential candidacy of  Senator Grace Poe; Gordon and Zubiri are  independents but they also ran under Poe’s senatorial slate; while Pacquiao is a member of Vice President Jejomar Binay’s United Nationalist Alliance (UNA).

Poe and Escudero are independents; Honasan, Binay and Ejercito  are part of UNA; Cayetano, Trillanes and Villar are members of the Nacionalista Party, Angara is a member of Laban ng Demokratikong Pilipino,  Legarda is with NPC while  Pimentel and Aquino are part of PDP-Laban and LP, respectively. CDG/rga