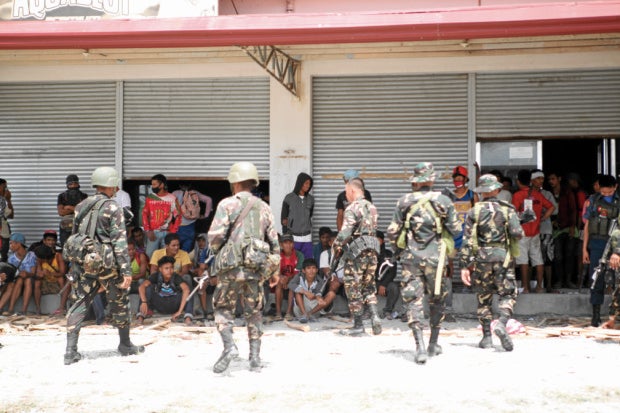 ELECTION -MAGUINDANAO / MAY 9, 2016:  Soldiers are seen outside a public-market turned polling center in Datu Unsay town in Maguindanao, May 9, 2016. The military take over the conduct of election in Datu Unsay due to security reason following confrontation of supporters of candidates running for mayor.PHOTO BY JEOFFREY MAITEM / INQUIRER MINDANAO

MANILA — At least 30 people have been killed and 22 injured in election-related violence, based on reports verified by the Commission on Human Rights (CHR).

Gemma Parojinog, officer in charge of the CHR policy office, said a total of 72 election-related cases of killings, strafing, gun poking, demolition and harassment have been verified. These cases ranged from as early as March 2015 up to April this year.

In the week leading to Election Day (May 3 to 9), 41 more fatalities were reported to the CHR through its election monitoring initiative with other civil society groups Bantay Karapatan sa Halalan.

“While the conduct of the election has been generally peaceful, we are concerned that there are areas where violence occurred,” Gascon said, citing the recent massacre in Rosario, Cavite.

“We’ve highlighted the killings and injuries but there were other subtle forms of intimidation, such as reverse vote-buying,” he said.

In Lipa, Batangas, some voters were given sacks of rice and money and their fingers were inked so they could not vote, according to the Legal Network for Truthful Elections (Lente).

“We anticipate that other violations have not yet been reported and we will double up our efforts in post-election process to validate, verify and collect additional information for filing of charges should evidence warrant,” Gascon said.  SFM/rga