Political dynasties win some, lose some

AS SOON as the results of Monday’s elections came trickling in, the fortunes of political clans holding sway in provinces in southern Luzon became clearer.

Members of prominent dynasties in Calabarzon (Cavite, Laguna, Batangas, Rizal and Quezon), Mimaropa (Mindoro, Marinduque, Romblon and Palawan) and Bicol either showed anew their strength or lost their sheen when people spoke through the ballot. 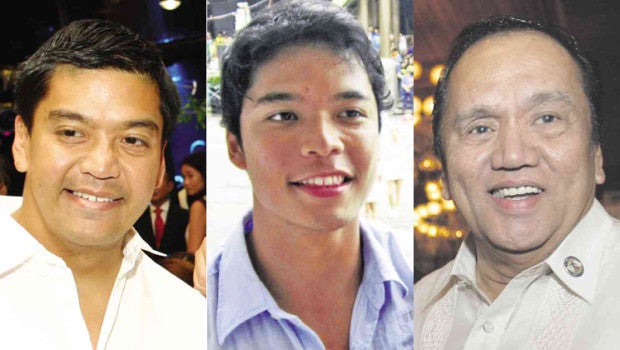 In Camarines Sur province, the patriarch of the Villafuerte clan suffered an unexpected loss from a candidate of leading vice presidential contender, Rep. Leni Robredo.

“I won because of Leni. Without her supporting me all the way, I cannot achieve this feat. She went out her way to come twice to campaign for me against the will of her campaign team,” Bordado told the Inquirer.

Essentially, it was the second defeat of Villafuerte, who fielded his wife, Nelly, in 2013 after he finished his term as representative. Back then, neophyte Robredo, widow of Interior Secretary Jesse Robredo, clobbered Nelly by garnering about 80 percent of the votes in the third district.

Bordado, a candidate of the Liberal Party (LP) who ran under the shadow of Jesse Robredo, the longest serving mayor of Naga and a good governance icon, was picked by Leni when she decided to enter the vice presidential derby.

Apart from the LP support, Bordado was assisted by Leni’s allies who helped him shoulder campaign expenses and logistics.

Villafuerte’s long career in politics spanned six presidents—from Ferdinand Marcos to Benigno Aquino III. His first defeat was in 1992 when the late Jose Bulaong beat him in the gubernatorial race.

Villafuerte was governor for 15 years until 2004, when his son, Luis Raymund or “LRay” took over the reins of the provincial government. The father won in the third district and served as representative until 2013.

Other clan members, however, won top posts in the province. will serve as representative of the second district while his son, Miguel Luis or “Migz,” was reelected governor.

In the first district, reelectionist Rep. Rolando Andaya Jr. won against Apolinar Napoles, a priest who challenged the rein of the Andayas in their district.

In the fourth district composed of 10 towns, former Speaker Arnulfo Fuentebella, patriarch of the Fuentebella political clan, was poised to win as representative, maintaining a slim margin over singer Imelda Papin.

His son, Mayor Arnulf Bryan Fuentebella of Tigaon town, lost to Migz Villafuerte in the gubernatorial race. Another son, outgoing Rep. Felix William “Wimpy” Fuentebella, did not run this year.

In Albay, the Baldo siblings were elected to different positions in two towns.

After taking a break for one term, Edcel Lagman regained his post as representative of the first district. When his term ended in 2013, his son, Edcel “Grex” Lagman Jr., took the position and served for a term.

Rep. Fernando Gonzalez, 76, was reelected in the third district. He started his political career in 1995 after the death of his younger brother, Francisco, then mayor of once Ligao town.

Gonzalez served as mayor of Ligao for three terms and became its first city mayor when it attained cityhood in 2001. After his term ended in 2004, he ran and won as governor, and served until 2007.

His wife, Linda, also served as mayor of Ligao for three terms. When her term ended in 2013, their niece, Patricia Gonzalez-Alsua, took her place. Alsua was reelected mayor.

In Cavite province, old names in politics remained strong in their bailiwicks.

Abraham Tolentino will serve as representative of the seventh district, while his wife, Agnes, was reelected mayor of Tagaytay City. Both had no rivals.

Abraham is a brother of former Metropolitan Manila Development Authority Chair Francis Tolentino, who once served as Tagaytay mayor and is currently at 13th place in the latest tally of the senatorial race.

Outgoing Mayor Jose Ricafrente Jr. won the vice mayoral race in Rosario town, while his son, Jose Voltaire, will replace him as mayor.

In Laguna, Joaquin “Jun” Chipeco Jr. and his son, Justin Marc or “Timmy,” were up for another term as representative of the second district and Calamba City mayor, respectively.

In Quezon, the Suarez family of the Bondoc Peninsula district solidified its hold of provincial politics, with relatives elected governor, representative, provincial board member and vice mayor.

The patriarch, former House Minority Leader Danilo Suarez, is returning to Congress after he ran unopposed. He will replace wife Aleta as representative of the third district.

Their son, David, was reelected governor. Two other children, Jet and Donato, were reelected provincial board member and vice mayor of Unisan town, respectively.

Some members of the Alcala political clan suffered defeat at the polls.

Former Rep. Irvin Alcala, a son of Agriculture Secretary Proceso Alcala, lost to Trina Enverga, a member of another prominent political family, in the congressional race in the first district.

In Occidental Mindoro province, the Villarosas, who have held major positions in the province for decades, were defeated in the elections.

For the first time in recent history, the once formidable Alberto clan had no one holding public office. The wife of former Mayor Jose “Cito” Alberto lost the mayoral race in the capital town of Virac, while a nephew was shut out of the municipal council.

Gov. Araceli Wong was substituted by her 25-year-old son, Jardin Brian or “JB,” but he lost to former Gov. Joseph Cua. She had to content herself with the win of another son, Pandan Mayor Joseph Al-Randie Wong, in the race for a seat in the provincial board.

Former Mayor Agnes Popa of Caramoran town regained her post, while her husband, Natalio Jr., returned to the provincial board.