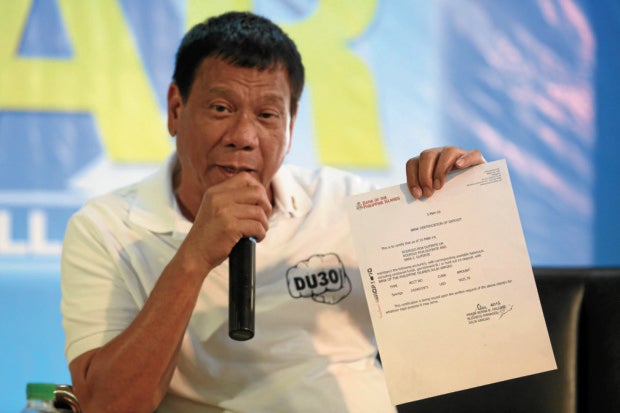 Presumptive President-elect Rodrigo Duterte has vowed to implement the freedom of information by issuing an executive order.

The erstwhile Davao City mayor vowed to impose the freedom of information right in the government’s executive branch.

“Uunahan ko na (I will be ahead of them). I will issue an executive order,” Duterte said.

He added there is no need for the FOI law to be passed before it is carried out in Malacañang and all the departments and agencies under it.

The proposed FOI, which has been promised by President Aquino, early in his administration, has been killed in Congress towards the end of his term.

Proponents of the FOI said the bill will not move forward in Congress without the decisive support from the President himself and the leadership of the House of Representatives,

Paola Alvarez, spokesperson of Duterte’s political party PDP Laban, said the incoming president’s pronouncement shows how decisive he is for the freedom of information.

“Of course, this would put pressure on Congress. Even if the Congress is a separate branch, the President has influence over it,” Alvarez said.TVJ