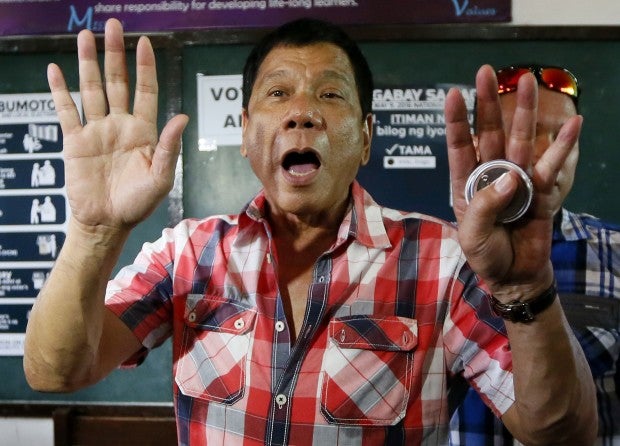 Front-running presidential candidate Mayor Rodrigo Duterte gestures at photographers to move back prior to voting in a polling precinct at Daniel R. Aguinaldo National High School at Matina district, his hometown in Davao city in southern Philippines Monday, May 9, 2016. Duterte was the last to vote among five presidential hopefuls. AP

NOW THAT he has emerged as the presumptive President-elect, Rodrigo Duterte has made a promise to the Filipino people—curses shall no longer escape his lips.

“I need to control my mouth. I cannot be bastos (rude) because I will be representing our country,” Duterte said.

He earned the ire of the Catholic Church and its ardent followers after he cursed Pope Francis, blaming him for the traffic gridlock during his visit in January 2015.

Addressing the Makati Business Club, he joked about using Viagra and accused the men in the room of having mistresses.

But the biggest controversy erupted after he rued at a campaign rally not being first in line, as befitting the mayor, to rape a pretty Australian missionary who was later killed by the prisoners who had taken her hostage in 1989.

“If you are the President of the country, you need to be prim and proper, almost maging holy na ako (I should be holy),” Duterte said.

Instead of his usual swear words, he would now cry out, anak ng jueteng (child of the illegal numbers game), or tang just like “that brand of fruit juice.”

“Tang” is also one syllable in the tough-talking mayor’s favorite curse involving a child’s mother.

Duterte, however, would not give up on his attacks against the media over “negative news,” even calling journalists “paid hacks.”

But he assured the people that press freedom in his administration would even be expanded and all government agencies, including local government units, would be ordered to “open up.”

“These guys printed the story on the front page without bothering to verify. Some of the properties listed under the name of Duterte and I really do not know why I have an account… of almost… ang lupa ko umabot pa ng (my land reached all the way to) Dipolog,” Duterte said.

“For how much?” he quipped, implying that some journalists may have been paid to write against him.

Duterte assailed the newspapers and television networks, saying they produced “garbage” when they published and aired the claim of Sen. Antonio Trillanes that he had hundreds of millions of pesos in several bank accounts.

“That was the garbage that some networks and broad sheets adopted,” he said.

He said he remained quiet about the media’s negative stories about him during the campaign period.

But last night he said, “I am tempted to give you the dirty finger.”

He had harsher words for his critics: Babalik din sa inyo yan (it will come back to you), and mamamatay na lang silang isa-isa (they will all die one by one).

He reiterated that press freedom would not be under threat in a Duterte administration, and that he would sign the freedom of information bill and order all government agencies to be open with the public.