Ejercito, a candidate of the United Nationalist Alliance (UNA), lost to reelectionist Gov. Ramil Hernandez of the Nacionalista Party.

Ejercito, an actor, won as Laguna governor in 2010 but his second term was cut short after being ousted in 2014 due to campaign overspending. This paved the way for Hernandez, then the vice governor, to assume the top provincial post.

But what was even more revealing in this year’s election results was Ejercito placed third and trailed his son, Jorge Antonio Ejercito, who got 334,975 votes.

Jorge Antonio had withdrawn his candidacy for governor in February, but the Commission on Elections (Comelec) had not deleted his name from the printed ballots despite a petition from the Ejercitos’ camp.

On May 6, Ejercito’s lawyer, Romulo Macalintal, filed a petition in the Comelec, asking the poll body to credit the votes cast for Jorge Antonio to Ejercito. 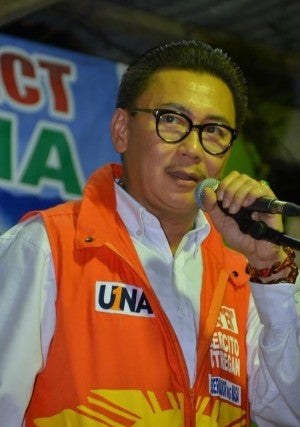 But their combined votes, at 566,389, would not be enough to beat Hernandez.

Ejercito, in a telephone interview on Tuesday, said he would contest the results, blaming his loss to the ballot confusion.

“It is very unfortunate for me that Comelec has again hit me hard for the second time since they removed me as the duly elected and legitimate governor of Laguna on May 26, 2014,” he said.

“This year, Comelec again favored [Hernandez] by not removing the name of my son (Jorge Antonio) from the list of candidates on the ballot which unfortunately created a lot of confusion and dismay from my loyal supporters,” he added.

In an earlier interview, Ejercito’s spokesperson, Gener Dimaranan, said they fielded Jorge Antonio in October to secure the candidacy of someone from the Ejercito camp, should their political rivals file a disqualification case against the former governor.

Ejercito is facing a case over an alleged anomalous contract with an insurance company when he was still mayor of Pagsanjan town in 2008.

Gloria Petalio, provincial election supervisor, said Jorge Antonio, in December 2015, wrote the Comelec to request the cancelation of his certificate of candidacy (COC).

The Comelec, however, did not honor this, citing rules that withdrawals must be done in person.

In February, Jorge Antonio went to the Comelec provincial office to withdraw his COC, but his appearance became moot as official ballots had already been printed by then.

But Ejercito said what happened was an “intentional delay” by the Comelec to favor Hernandez, who, he said, is an ally of the administration’s Liberal Party.

“The province of Laguna did not have fair and square elections,” he said.

Aside from Ejercito, his brother and basketball star, Gherome Eric, also lost his bid to represent the first district in the provincial board.

But Ejercito’s wife, Girlie, is leading in the race for mayor of Pagsanjan, while his son, John Paul, is poised to win as councilor, partial and unofficial count from the Comelec showed.