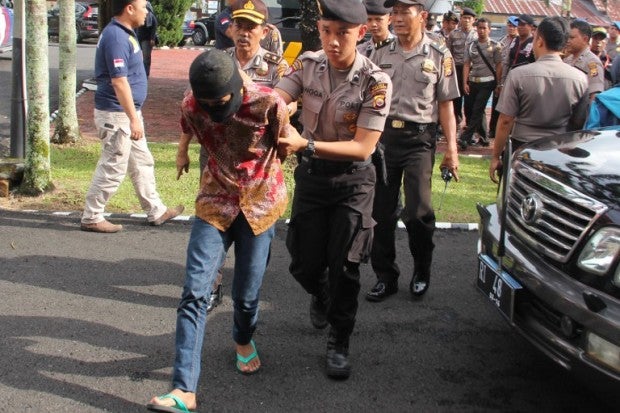 This picture taken on May 5, 2016 shows an Indonesian policemen bringing a masked underaged suspect in the gang rape and murder of a 14-year old girl for a meeting with Indonesian Minister of Women Empowerment and Children Protection Yohana Yembise in Curup, Bengkulu. Indonesian activists called for the government to urgently strengthen laws against sexual violence after the brutal gang-rape and murder of a 14-year-old girl sparked outrage. AFP

Seven Indonesian teenagers were jailed Tuesday for the brutal murder and gang rape of a 14-year-old girl that sparked a national debate on sexual violence.

They were among a gang who set upon the schoolgirl while she was on her way home in a small village on the western island of Sumatra.

Her battered body was found three days later in woods, tied up and naked, and 12 people were arrested over the attack.

On Tuesday seven attackers, aged 16 and 17, were found guilty at a court in the Curup district of Sumatra and sentenced to 10 years in jail each.

“This is in line with our demands,” said Eko Hening Wardhono, an official from the attorney-general’s office, adding that police were still investigating the other five.

A further two suspects are still on the run.

The crime took place in early April but it only caught the attention of the nation a month later, as reports of the incident went viral on social media and tens of thousands signed online petitions.

The case led activists to call for harsher punishments for sex attackers and sparked protests in the capital Jakarta. It also prompted President Joko Widodo to call for better protection for women.

It has drawn comparisons with the fatal gang-rape of a student on a bus in Delhi in 2012, which sparked mass protests and led to an overhaul of India’s rape laws.

“Cases like this happen due to various reasons, from parenting problems, to bad education and drinking problems,” she said.

Sexual violence against women is rampant in Indonesia, according to the National Commission on Violence Against Women.