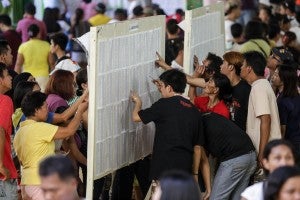 Voters lining up to check their precinct numbers. Photo by Tristan Tamayo/INQUIRER.net

At 3:41 a.m. on Tuesday, the town’s Board of Election Canvassers completed the canvass of votes after the cluster precinct of Barangay Kanyuko, the last return being awaited by the BOC, was finally transmitted manually to the canvassing area.

Gica, the incumbent vice mayor and the candidate of the Liberal Party (LP), garnered 15,577 votes. Garcia, of One Cebu, trailed with 10,631 votes.

Rainero Asentista, Gica’s running mate, was also proclaimed as new the vice mayor with 11,768 votes, over 3,000 votes more than those of his nearest rival,  Cardo Condes, who got 8,734; and nearly triple those of another candidate, Luciano Famor, who got 4,305.

Dumanjug has 32,494 registered voters who cast their votes in 60 clustered precincts.

Dumanjug was one of the eight local government units in Cebu categorized as election hotspots  or election watchlist areas (Ewas) due to intense political rivalry among its candidates.

On the eve of the election, supporters of the Garcia and Gica camps figured in a shootout that wounded one of Gica’s supporters. Both camp traded charges as to who provoked the firefight, with the Garcia camp claiming they only fired back after Gica’s supporters fired shots at a councilor in Garcia’s slate.  SFM