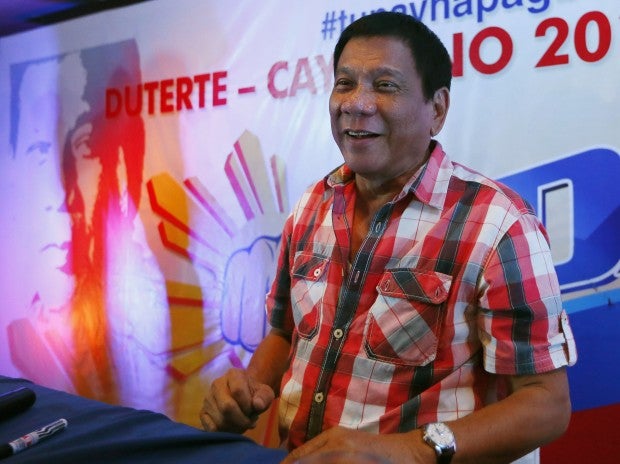 DAVAO CITY—Even before the polls closed on Monday afternoon, Davao City Mayor Rodrigo Duterte offered “reconciliation and healing” to his rivals in the race for Malacañang, which he appeared to have won.

The vice presidential race was seen as a head-to-head contest between Sen. Ferdinand “Bongbong” Marcos Jr. and the administration’s Leni Robredo.

“I would like to reach my hand to my opponents. Let us begin the healing of the land,” Duterte said in a talk with reporters immediately after he voted at Daniel Aguinaldo High School in Matina District here.

He said his offer of healing covered “everyone,” including his main tormentor, Sen. Antonio Trillanes IV, a vice presidential candidate who accused him of concealing millions of pesos in undisclosed bank accounts and sued him in the Office of the Ombudsman, alleging that he charged for 11,000 nonexistent employees of the Davao municipal government as the campaign drew to a close last week.

Duterte described the attacks  during the campaign as “virulent,” causing the candidates pain, especially those who were hit with what he called “black propaganda.”

“If you don’t accept the goodwill, that is fine,” Duterte said, slipping back to the thuggish posture that he used to portray himself as a trash-talking, antiestablishment politician to capture the admiration of millions of ordinary voters, who abandoned the leading candidates and put him at the head of the race in the last few days of the campaign.

His promises to kill tens of thousands of suspected criminals outside the justice system, abolish Congress and declare a revolutionary government if lawmakers refuse to back his policies or move for his impeachment if found guilty of mass murder have alarmed rivals, who warned that he was a dictator in the making.

Duterte’s expletive-laden speeches, including a talk with reporters in which he called the Pope a “son of a bitch,” and insensitive talk, such as joking at a campaign rally that he had wanted to have been the first to rape an Australian missionary who was gang-raped and murdered in a jailhouse riot in Davao in 1989, did not dent his popularity but instead seemed to have made him more popular to voters.

As the vote came on Monday, it was clear that he was the man to beat in the race for the presidency and in the early count of the vote, he appeared to be headed toward a landslide.

His votes so far were from the Luzon provinces of Abra, La Union, Pampanga, Quezon and Laguna, and Cebu, Leyte, Biliran and Bohol in the Visayas.

Vice President Jejomar Binay, who had been banking on a come-from-behind victory, had received 3,755,745 votes, roughly just a third of Duterte’s votes.

Sen. Miriam Defensor Santiago was in the fifth place, barely breaking through the million mark with 1,150,924 votes.

It was her third attempt to win the presidency.

The Inquirer’s partial and unofficial tally is based on data transmitted to the Commission on Elections’ transparency server at the Pope Pius XII Catholic Center in Manila.

The Inquirer is among a handful of news organizations given access to real-time results.

Senators Antonio Trillanes IV and Gregorio “Gringo” Honasan II, both bottom-dwellers in the polls, remained consistently in the last two spots: Trillanes had 552,266 votes, while Honasan had 481,102 votes.

In the unofficial count of the Parish Pastoral Council for Responsible Voting (PPCRV) as of 9:10 p.m., Duterte was pulling farther away from his rivals in the presidential race after 67 percent of clustered precincts had been counted.

Marcos had a narrow lead over Robredo in the race for the vice presidency.