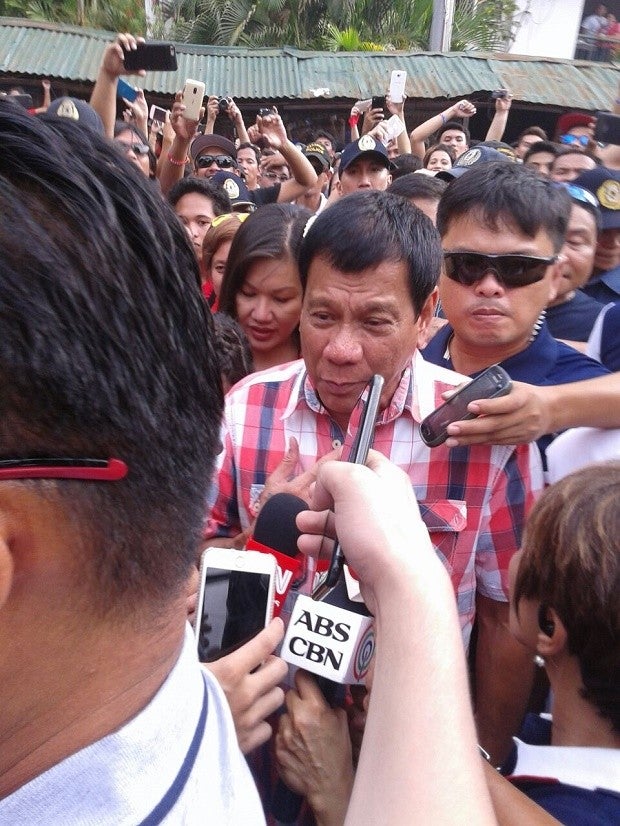 Duterte arrived at 3:05 p.m. and walked a few meters from the school gate to his polling precinct.

The tough-talking mayor was the last presidential candidate to vote after his rivals trooped early to their polling precincts to cast their votes.

Dressed in a checkered red and white polo, Duterte was mobbed by his supporters as he arrived at his polling precinct. He was with his wife, Cielito “Honeylet” Avanceña and daughter Veronica.

The crowd chanted “Duterte, Duterte” as they tried to get near the mayor, which made it hard for him to enter his precinct.

Asked about his thoughts on winning the presidency, he said, “I am not positive. I am saying I ain’t there until I am there.”

It took Duterte around 10 minutes to cast his vote.

In a separate press conference at the Royal Mandaya Hotel, Duterte said he remains hopeful in winning the presidency.

“So far, I have not received any reports of cheating and violence. Maybe in some areas but not big enough to make a dent in the elections now,” he said.

Prior to voting, Duterte took time to rest after he capped off his 90-day campaign on Saturday at the Luneta Park in Manila.

Pre-election surveys showed Duterte with a wide lead against his rivals. CDG/IDL/rag