CITY OF BATAC, ILOCOS NORTE — Vice presidential candidate Senator Ferdinand “Bongbong” Marcos Jr. expressed confidence that his victory for the 2016 elections is just around the corner.

“I’m feeling that by all indications, this (vice presidential run) is successful,” he told reporters as he cast his vote at the Mariano Marcos Memorial Elementary School on Monday.

Marcos, dressed in light pink barong and olive green pants, proceeded to his designated poll area shortly after 6 a.m. and stayed for around 15 minutes.

After voting, the son of the late strongman Ferdinand Marcos proceeded to the nearby Immaculate Concepción Parish (popularly known as Batac Church) to pray.

“I prayed that God’s will may be done. After all that should be what the elections should be about,” he told reporters later at the Marcos Mansion across the church.

READ: Bongbong Marcos upon voting: ‘God’s will be done’

Marcos, who has warned of possible massive cheating and claimed discrepancies in receipts in overseas absentee voting, said casting his ballot went smoothly for him.

“Wala namang problema, ‘yung resibo sakto naman sa binoto (I did not encounter any problem. Those whom I voted for were the names reflected on my receipt),” he said.

READ: Bongbong Marcos: Into politics out of necessity

The senator, however, acknowledged that other precincts may face problems but remained hopeful of orderly and honest elections.

(We are talking about millions of precincts here. I just hope that the Comelec is prepared to address and solve the problems so the credibility of the elections will not be affected.)

After his press briefing, he was joined by some of his family members — wife and son Lisa and Sandro, sisters Imee, Irene and Aimee and  former First Lady Imelda Marcos — at the mansion for breakfast. They later visited the mausoleum, where the remains of his father are on display.

Around midday, the senator flew back to Manila where he will monitor the results of the elections through media reports and their own internal quick count at his headquarters in Mandaluyong. IDL/rga 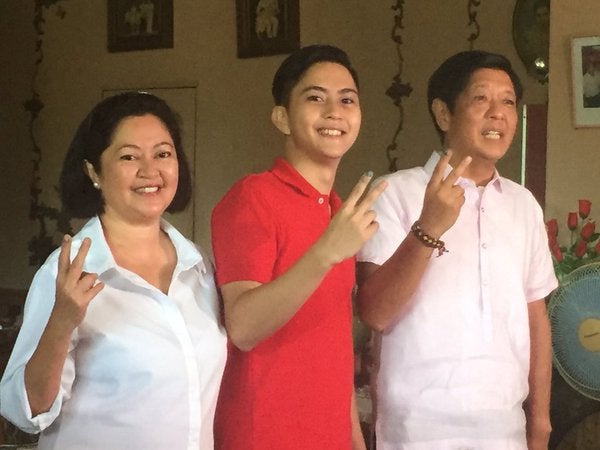